BARBARA BRABEC has been self-employed at home for most of her adult life. Her writing and publishing career began in 1971 when she and her husband Harry launched a quarterly magazine. Artisan Crafts thrived until a long recession brought that venture to a close in 1976. Then motivated to become a professional writer, she quickly achieved success as a freelance writer, magazine columnist, and publisher of home-business newsletters, with national visibility as an industry leader that attracted the attention of trade book publishers.

Between 1979 and 2006, she published six trade books, most of which enjoyed revised editions. Two of those books—Creative Cash and Homemade Money—were decades-long best sellers and classics in their individual fields. But all good things eventually come to an end. All these business-related books are long out of date, essentially out of print, and thus no longer recommended for purchase.

When widowed in 2005 after nearly 44 years of marriage to Harry and many years of leadership in the home business and crafts industries, she reinvented herself as a writer, editor, independent publisher, and author’s consultant. After writing and publishing two biographical memoirs in 2010 and 2017 and teaching a series of life-writing workshops in 2018, she decided to focus on writing only about LIFE and all the surprises, challenges, opportunities, and adventures it holds for each and everyone who is striving to live life fully, joyfully, and abundantly.

Of herself she says, "I'm just a writer who has always written about what she knows, and a teacher who has learned that the best lessons are those taught by example. Perhaps the most important lesson here is the need keep revising one’s life and business plans as one ages and the world around us keeps changing.”

Related Article: “The Need for Change as You and Your Business Grow Older.” 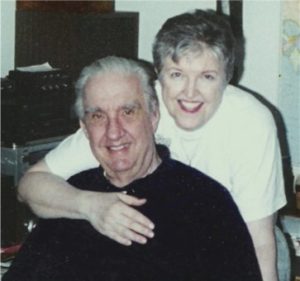 Barbara and Harry on their 37th wedding anniversary.

BARBARA WAS MARRIED for nearly 44 years to Harry Brabec, who died in 2005 at the age of 77. He left a legacy of original humor she documented throughout their life together, incorporating some of it into nearly every chapter of her biographical memoir about him, The Drummer Drives! Everybody Else Rides.

Harry assisted her in her business for many years and always kept her laughing. Of himself, he once said, “He was always difficult, but he never was a bore.”

Her widow's tribute to him was originally published on several pages of her website in 2005; now available as an illustrated PDF document titled Remembering Harry Brabec.

Barbara's Services
for Writers and Authors

See the "Wall of Bengal Tiger Cross-Stitch Embroideries (PDF) that took Barbara thousands of hours to stitch over a period of several years  (Other creative projects appear in the Creative Endeavors articles department.)

Some of Barbara's life experiences and lessons learned will be found in Barbara-Personal ARTICLES.

• Getting it All Together-At-Home Handbook by Jean Ray Laury
• The Best of Both Worlds by Joan Wester Anderson
• Working at Home: Is It For You? by William Atkinson
• You Can Make It Without a College Degree by Roberta Roesch
• Playing Hardball with Soft Skills by Steven J. Bennett

Contributed chapters to The Complete Guide to Writing Nonfiction (American Society of Journalists and Authors), and For All the Write Reasons by P. C. Gallagher.