THE DRUMMER DRIVES! Everybody Else Rides is the story of Harry Brabec’s musical life and times—the up-and-down life story of a man whose accomplishments went well beyond the field of music; a remarkable man who got knocked down many times but kept bouncing back time and time again. Amazon reviewers have called this historical biography and memoir:

“A compelling, enriching read”  –   “A Musical Love Story”  –   “A great nostalgic ride for any musician!”  –   “One of the most inspiring books I have ever read—it grabbed my heart!”

". . . a meticulously crafted memoir . . . an exceptional look back at the unique lifetime of a humorist who also happened to be one of the most outstanding musicians of his time." - Sam Denov, Chicago Symphony percussionist 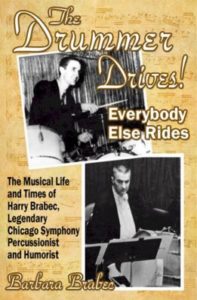 Ordering a Print edition
on Amazon

Pay attention to who’s shipping the book and ignore the price in the “Paperback” box unless it says $14.95, new, and shipping promptly from Amazon—not from a used book seller in the UK or from Amazon/Canada for a higher price. See LEFT for two other purchase options!

a World of Music 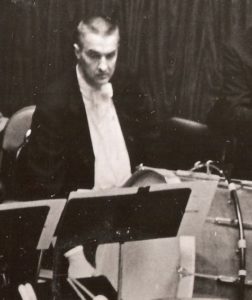 HARRY'S REPUTATION as a drummer in high school was legend, but his name became legend among symphony musicians and percussionists when, at the peak of his career as Principal Percussionist of the Chicago Symphony Orchestra in 1956—after five years of exemplary performance with the Orchestra—Fritz Reiner dismissed him for purely personal reasons.

Reiner’s selfish act literally destroyed Harry’s professional life, devastated his ego, shattered his personal life, and ultimately led to the failure of his eight-year-old marriage and the loss of his six-year-old daughter. So despondent at that point, Harry simply gave up and left music for awhile to do menial work.

A SIDENOTE about Harry and Fritz Reiner. In a directory of musicians who were—or still may be—in the Chicago Symphony Orchestra, the notation about Harry’s death and background includes this little story:

“Impressive snare drum in Reiner/CSO recordings of Schwanda the Bagpiper and 1812 Overture. Reiner, however did not like Brabec. In the 1812 Overture recording, Brabec brought in a shotgun to use for the cannon fire. Reiner rejected the shotgun effect, and added ‘Besides, I don't trust you!’”

Barbara met and married Harry in 1961. Beat by beat in this autobiographic narrative and biography, she tells his comeback story as a freelance percussionist in Chicago in the sixties, then flashes back to his career before they met before going on to tell how her career path and their marriage changed when life forced Harry to move in new entrepreneurial directions in the seventies and beyond.

The Drummer Drives! offers a unique view of a colorful period of Chicago’s musical entertainment history that is spiced with romance, drama, and Harry’s wit and humor. The book revolves around the author’s lifetime of journals and Harry’s scrapbooks and nostalgic letters, which are filled with historical “music biz” stories and remembrances of the days when he was playing with the big bands and doing recordings in Chicago; his comments about many of the musicians, entertainers, and conductors he worked with; his thoughts on being Czech; his love of good food, fine books, record collecting, band music and the circus; and how he felt about getting old and being forced to lay down his sticks because of ill health. The book also includes colorful anecdotes shared by many musicians who knew and worked with Harry.

“Anything for a laugh” could have been Harry’s motto, so The Drummer Drives! is liberally spiced throughout with his wit and original humor that’s guaranteed to give the reader many chuckles and some good belly laughs too. (All of this humor was documented in a handwritten “Happy Book” the author kept throughout her life with Harry in which she recorded every funny thing he said to her that made her laugh. His letters to musicians also contained generous shots of humor.)

The book’s closing chapter, “Encore! Encore!” includes a baker’s dozen of short stories that illustrate how Harry made Barbara laugh from day to day when she least expected to be amused. Of Harry’s wit and humor, Rich Sherrill, one of his drummer students summed it up perfectly:

“Harry had the ability to move freely from one subject to another as easily as he could move from playing a circus one day to performing in the symphony the next. What he was really good at was making some smartass remark that fit the exact situation we were in at the time. His brain always seemed to be running a hundred miles a minute, and every conversation would have some humor in it because he would immediately take all the data, the environment, and the people there at the time, process it faster than the fastest computer, and spit out a humorous quip.”

Back to all of Barbara's Books

THERE IS MUCH TO ENJOY in this informative and humor-laden memoir, but you may also find yourself tearing up at times as you read this honestly told story of the author’s unusual life journey with a man who was “no ordinary Joe,” an individual so complex that Barbara was still trying to figure him out after nearly 44 years of marriage and five years as his widow.

“Harry remains the most complex, frustrating, interesting, and amusing person I’ve ever known," she says, "and the excitement, color, and drama he brought to my life cannot be conveyed in mere words.”

In his review of the book, Gary Matts, President, Chicago Federation of Musicians Local 10-208, A.F.M. said: “Barbara's touching story of her life with Harry is an enjoyable read ... a true life tale of the travails of life with a freelance musician as only those who have lived it can tell it. ... a wonderfully well written documentation of a time in Chicago's musical entertainment history that is gone forever."

Added Sam Denov: “The love that this couple had for each other is evident throughout the book. It is almost palpable. One can't help but be warmed by the relationship they shared. Every reader of this book will be as entranced as I was."

THIS COMPANION WEBSITE to my memoir was closed in November, 2014 after four years of publication because I could no longer justify the time needed to keep this nostalgic endeavor going.

The site, which one reviewer said was “the chronicle of an entire musical age,” featured many historical music photos and stories that could not be included in the book, along with several articles by other musicians who knew or worked with Harry and told me stories about him that I’d never heard before.