Accidents and Liability Insurance Issues When You Fall on Public Property 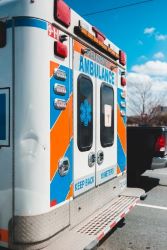 Photo by Erik Mclean on Unsplash

Accidents and Liability Insurance Issues
When You Fall on Public Property

A fall on black ice in 2010 led Barbara to scary discoveries about medical liability insurance and the financial pitfalls of falling on public property—plus the knowledge that she had a benign brain tumor called a meningioma. This personal experience story includes tips about insurance as well as dealing with the after effects of an accidental bump to your head.

On my way to church one Sunday in March 2010, I parked in the shopping mall’s parking lot where the owner had given my church permission for its parishioners to use those spaces. I locked the car and started to walk across the parking lot thinking I needed to avoid the puddle of water I saw ahead of me.

The next thing I remember is waking up with a blazing headache and wondering what the heck I was doing flat on my back with all those people looking down at me with grave concern on their faces. Fortunately, some other church goers had seen me fall and one of them had immediately called an ambulance whose sirens I could hear in the distance as I regained consciousness. I wanted to get up, but they were smart enough to tell me to lie still until the ambulance arrived because they said I had been unconscious for a little while. I did have the presence of mind to ask where my purse was as they loaded me into the ambulance, but the ride there and entry into the ER was all a blur.

Obviously, the water I thought I saw was actually black ice, and I had absolutely no recollection of starting to fall. Usually I know when I’m going down and I’ve learned to always “let myself go” as I try to fall flat on my back if I’m going backwards, and I always throw my arms up in a face-forward fall because I can’t afford to hurt my hands by letting them hit ground first. Better bruised and scraped arms than a broken wrist! I guess my body was well trained because this time I did fall flat on my back, doing no damage to it save for a few strained muscles for a few days afterward.

Unfortunately, the back of my head bounced off the paved area, taking the brunt of the fall and giving me my first concussion. An ER technician sent me for a cat scan to see if there was any bleeding in the brain. Fortunately there wasn’t (Harry always used to say I was hard-headed), but this is when I learned I had a small benign meningioma—which was a new word in my medical vocabulary. (More about this below.)

On releasing me, the ER doctor said something about medical liability insurance which I didn’t grasp at the time but only understood a few days later when I called the hospital to tell them they had some outdated information about me in their files. That’s when I learned that Medicare wouldn’t cover the ER expenses because I had fallen on public property.

Thus began a couple days’ investigations into how I could get this bill paid for. I had assumed (and you know what they say about that word), that Medicare and my supplemental insurance would cover all hospital expenses, but now I was told that the owner of the shopping mall was liable. To make a long story short, I learned that the mall would not assume liability for a fall caused by “normal winter conditions,” and that by shoveling the snow they had taken “prudent steps” to protect the public. Fortunately, they DID have an accident policy that would cover up to $5,000 of medical expenses. Since my ER visit and routine follow-up doctor appointments were only around $3,000, I was home free, financially speaking.

As time passed, I began to wonder what would have happened if I’d broken a hip or a wrist and had a large medical bill as a result. On talking to the mall’s insurance agent and a couple of other insurance experts, I learned that Medicare would NOT automatically pick up the difference after the first $5,000 was paid. To resolve this, I would have had to sue the owner of the shopping mall knowing full well they wouldn’t pay because I couldn’t prove negligence on their part. Maybe after a few years of court hassles and a lot of financial expense to me, Medicare MIGHT pay the medical bills because I had then made every effort to collect.

I have no idea how someone who isn’t on Medicare would get their medical expenses paid if they fell on public property, and I wonder, too, how the current health care insurance policies would deal with the issue of liability insurance in a case like this.

All this has certainly made me realize the danger of falling on anyone’s property but my own, and even here I was advised to check to be sure my homeowner’s insurance didn’t include me as one who could collect medical expenses if I had an accident in my house or yard. This fall turned out to be life-changing for me. Given my age and legs that do not always keep me steady on my feet, I never step out of the house now if winter conditions are icy and a fall is even remotely possible. You’ll have to figure out your own strategy for dealing with this kind of unexpected life event.

Meningiomas are the most common type of tumor that originates in the central nervous system. They occur more often in women than in men. I was advised to never again hit my head like that, as if I’d wanted to hit it in the first place.

“It’s like football players who get hit in the head too often,” the ER doctor said. “The last thing you want to do is hit your head again because it could lead to serious medical complications because of the meningioma.” Falls aside, the doctor added that this was nothing to worry about, however, and that many people have these benign tumors and only learn about them if they happen to have a cat scan for something else.

From an overview on Mayoclinic.org, I learned that a meningioma is not technically a “brain tumor,” but it is the most common type of tumor that forms in the head. Sometimes a meningioma, which compresses or squeezes the brain, nerves, and vessels, could grow over many years and cause symptoms.

After my fall, I had a few days of headaches, body aches, and a sense of just not “being right,” along with bouts of vertigo that lasted a couple of weeks. It took another week or so before I felt like my brain was once again communicating properly with all my body parts. I didn’t know for some time what the long-term affects from “shaking up my brain” would be, but I’m convinced that the balance problems I began to have shortly afterward were directly related to my fall. In time I needed an MRI of the brain and some physical therapy to learn how to deal with my balance problem. Keeping my legs strong through regular exercise made all the difference.

For reasons I’ve never understood, my balance is worse on some days than others, so I keep a cane handy, just in case. Last winter I suddenly had an attack of vertigo that sent me for more physical therapy. Fortunately that turned out to be crystals in my ear, and the dizzy spells went away. But my balance is still shaky at best, so I never go out in my yard or take a walk without taking the “walking stick” Harry made for me out of PVC pipe.

I can’t prove it with substantiating articles on the web, but I believe the bump my head took in the fall also seriously affected my typing. Before the fall I was a speed typist who rarely made a typo. Ever since, I’ve been unable to type a paragraph without a few typos in it. It’s as if my brain is no longer sending the right messages to my feet (causing the balance problem) and to my fingers, which know the keyboard by heart. The latter has definitely slowed me down as a writer because I have to do a lot of extra proofreading to find and correct my typing errors.

We all learn new things from every life experience, and in this case I learned that I had a supportive family at the church I’d recently begun to attend. Being without family in the area and not wanting to bother a friend, I was feeling very lonely in the ER when I looked up and saw one of the pastors walk into the room. Someone who saw me fall told her I was on the way to the hospital, and she arrived shortly after I got there. In addition to giving me great emotional support, she arranged for two church deacons to give me a ride home afterwards. They also drove my car home from the parking lot and made sure I had everything I needed for the next couple of days, following up with phone calls just to be sure.

The pastor also told me that from that point on I needed to park in the church’s small parking lot, as their insurance policy would cover medical costs for any accident one of their parishioners might have.

We’ve all heard stories of how a bump on the head has sometimes led to the death of an individual who didn’t seek proper medical attention immediately, so I didn’t take this bump on my head for granted. On being dismissed from the ER, I was told I shouldn’t be alone the first night “just in case,” but as a widow I had no options for having someone stay with me that night, so I did the next best thing. I arranged for my sister, Mollie, to call me in the middle of the night to see if I could be easily awakened, and if not, she had the number of my good neighbor across the street who was “standing by” with a key to my house and his cell phone ringer set to high so he’d hear it if he got a call. I told my sister to ask me what my social security number was when I woke up because that would tell her my brain was working okay. She gave me a laugh when she said she doubted she could recall her own social security number if asked for it in the middle of the night.

I wouldn’t want to take another fall and bump on my head like this one, but I have to say that all the things I learned as a result of this accident made whatever discomfort I had well worth the experience. And I remain exceedingly grateful that my particular meningioma was benign and is unlikely to grow much in the remaining years of my life.

As I write this in late 2021, I have another MRI scheduled as a routine follow-up. If the meningioma has grown and I have to learn how to live with my balance issue, I’m told I’ll have some physical therapy options to consider.

Injury Liability for Slip and Fall Accidents on Snow and Ice

Back to
Money Matters T/C