How Barbara Brabec moved from beginning to professional writer and the reading and self-study she had to do to achieve success.

FOR MORE THAN 35 YEARS, I had high visibility in the home-business industry as a speaker and author of several best-selling books. In those years I was often asked for advice on how to get started as a professional writer, as well as how to get a first book published when one was an unknown writer. In a few words, it wasn’t easy to move from beginner to pro. Everyone is a writer of sorts, but it takes real effort to become a professional writer who can actually earn a living from their writing. For me, the journey began with an intense period of reading and self-study.

MY LATE HUSBAND HARRY and I launched a crafts magazine in 1971 called Artisan Crafts. I’ve always thought it curious that I edited the magazine and contributed many articles to it for five years yet never thought of myself as “a writer.” I didn’t get serious about writing until a few months after we ceased publication of the magazine in 1976, and only then because my life circumstances had changed. Suddenly without anything challenging to do, I heard or read something that prompted me to go to the library and pick up a couple of books on writing.

I didn’t know it at the time, but one of the three books I selected turned out to be a classic, and one of the best books any beginning writer could hope to read. It was On Writing Well—The Classic Guide to Writing Nonfiction by William Zinsser. (The 30th anniversary edition was published in 2006, but its content is timeless.)

Zinsser’s book changed my life because it changed the way I thought about myself and educated me as to what a “good writer” actually was.

I used to believe that good writers had to use big words and write long sentences, like the flowery book reviewers in the newspaper. Not true! “Use short words and short sentences,” Zinsser advised, “and write about what you know.” By the time I finished his book, I knew I could be a professional writer if I chose to be one.

There are hundreds of how-to books for writers, yet few writers who read these books ever figure out how to earn a living from their craft. The problem with most writers, I believe, is that they choose what they want to write about rather than what editors and publishers want to buy. Clearly, failure to heed the advice of seasoned pros is a great way to decrease your chances for success. I believe I was able to earn a living from writing only because I decided at the beginning to be as professional a writer as possible, and then I methodically applied all the things I learned in dozens of books and magazines on how to write well and be paid accordingly. Although I’m now well past the age of retirement, I’m still passionate about my writing, and I constantly strive to make my next article or book better than the one before. 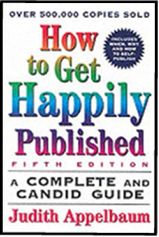 Another extremely helpful book, which I discovered in the mid-1980s when I found myself getting interested in self-publishing, was How to Get Happily Published—A Complete and Candid Guide by Judith Appelbaum (and a co-author whose name disappeared from later editions). Last updated in 1998, it remains a popular seller and a good example of how one book can be life-changing.

I was just getting interested in self-publishing when the first edition of this book was published, and the end of this book so touched my heart that I was prompted to write my first fan letter to an author. (My second and last fan letter was to Jimmy Stewart when he published his book of poetry in 1989, He sent a handwritten thank-you card in response . . . but that’s a story I’ll tell you later.)

I’ve never forgotten these words in the reply I got from the authors of the self-publishing book: “We can live without letters like yours, but not as well.” That pretty much sums up how I’ve always felt about my fan mail, too.

I read this particular book well into the night while Harry snored away, oblivious to the fact that his life was about to change because of what his wife was reading. This book was such an encouragement because it gave me a pat on the back at a time when I needed it most. It also made me realize my true potential as both a writer and self-publisher. Best of all, this book was a virtual roadmap to success in the self-publishing world of the eighties. Many things have changed since then, but if you’re lacking encouragement to pursue your dream, I think you’ll find much in this book to take away.

There are many other fine books for writers that you should consider adding to your library, of course, and a search on Amazon will turn them up. In your desire to learn, be sure to read writer’s magazines, too. One of the first things I did when I decided to become a professional writer in the late seventies was subscribe to Writer’s Digest magazine and then order five years’ of back issues, What an incredibly helpful magazine for both beginners and seasoned pros! Throughout the writing of Creative Cash, my first book, I studied those back issues and wrote a much better book because I quickly applied what I was learning from each of the articles in those issues. (Creative Cash was in its sixth edition when it went out of print 32 years later, which may be a record for a home-business book.)

The Real Secret to Good Writing

FROM EXPERIENCE I’ve learned that average writers become good writers only with considerable effort and attention to detail. And good writers don’t just write, they become specialists in the art of rewriting, which in my opinion is the real secret to good writing.

When I was writing my first book, I used to read issues of Writer’s Digest in the evening, and Harry would often hear me mutter, “Oh, no! I’m doing it all wrong.” Next morning, I’d go back to my book-in-progress and start rewriting, correcting my bad writing and attempting to avoid other common errors beginning writers always make. I probably rewrote my first book a dozen times, and after finishing it I felt like I’d also completed a college course in writing.

TIP: Test the quality of your work by reading it aloud. Whenever you stumble, you can be sure some reader will stumble, too. Make whatever changes are necessary to make your copy flow.

MY FIRST BOOK was published almost word for word as I wrote it, and I was pretty proud of myself when it began to get rave reviews and went on to sell more than 110,000 copies. Twenty years later, however, when I reread that book with an eye to doing a sixth edition for a new publisher, I was embarrassed to find that my writing wasn’t nearly as good as I thought it was, and my organization of material did not please me at all. ll. In the end, I simply wrote a brand new book, giving it a new subtitle in the process.

In my defense, I was writing books on a typewriter in the seventies, which made it impossible to move content from one place in the book to another. Either a correction or change had to be made without affecting the pagination so I could just retype that single page, or I had to retype many pages to the end of a chapter to have a good looking manuscript to send to the publisher. Having word processing power was a life-changer for me and every other author publishing in those days. Once I had the ability to add, delete, or move blocks of text from place to place right up to the last minute before submitting a manuscript to a publisher, I automatically became a better writer (and something of an expert in rewriting as well).

The real point I want to emphasize here, however, is that many writers (myself included) tend to let their egos get the best of them as soon as they have been published, and that’s a big mistake. Writing, like woodworking, or growing roses, or designing websites, is both an art and craft that must be continually practiced, honed, and improved for maximum success. The most successful writers are never satisfied that they are as good as they can be, but are always striving to become better. I’ve often related to something Samuel Johnson once wrote:

“Read over your compositions and when you meet a passage you think is particularly fine, strike it out.”

Tips from Other Great Writers

The most successful writers also write about things they know. I like this quote from Elizabeth Forsythe Hailey, one of my favorite fiction writers:

“Search your own life for the story only you can tell. The best thing about writing from life is that you can be sure of using original material. And no research is needed beyond the time you spend looking deep inside your own heart.”

Closing on a humorous note, also consider this tip from Don Marquis:

“If you want to get rich from writing, write the sort of thing that’s read by persons who move their lips when they’re reading to themselves.”

Barbara’s Editing Checklist of Common Writing Errors. There are many things you can do to “clean up” your book manuscript prior to hiring someone to edit it. To save money on your professional copy editing costs, use this helpful checklist to find errors you may have missed

One Writer’s Success Story. Barbara’s motivational article on how to succeed in your chosen life endeavor or entrepreneurial venture through nothing more than hard work, self-study, and a willingness to keep going even when the future looks bleak.

Back to
Writing &Publishing T/C