Five-Star Reviews for The Drummer Drives

EXCERPTS from Amazon Five-Star Reviews for 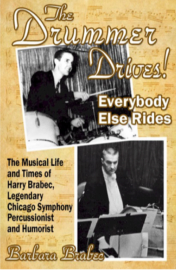 •  “Much to Savor. The Drummer Drives ... reveals Barbara Brabec’s considerable talent as a storyteller.

• “... a living relic of a now lost musical age; a menagerie of musings on love, fate, mankind's inter-connectedness, and the vacuity of widowhood."

• “A Musical Love Story ... a meticulously crafted memoir ... an exceptional look back at the unique lifetime of a humorist who also happened to be one of the most outstanding musicians of his time.”

• “... a loving and humor-filled chronicle of the life of an individual who will make you laugh and cry whether you knew him personally or not and whether you are a musician or not.”

• “I have neither been to Chicago, nor do I have a passionate interest in music. But by the end of the first chapter any doubts about enjoying the book had been cast side. I was engrossed.”

• “One of the most inspiring books I have ever read—it grabbed my heart!”

THIS PAGE is a very small sampling of the many 5-star reviews on Amazon. Below are paragraphs from which the above reader review clips were taken. Read all reviews and look inside the book on Amazon.

A note from one of Harry’s students

» “Much to Savor. The Drummer Drives ... reveals Barbara Brabec’s considerable talent as a storyteller ... Gangsters, burlesque, night clubs, cocktail lounges, and busy recording studios all were part of the robust musical scene that Brabec describes in rich detail, along with ballet, opera, and symphony 'gigs,' and the heyday of great musicals and Big Band sound. Legendary names in show business come to life through Brabec's personal vignettes and the remembrances of musicians who worked with the stars ... This book is definitely worth a read, and I recommend that we keep our eyes open for Brabec's next story." - Sam Mazze, Mazze Communications

» “A Compelling, Enriching Read. The Drummer Drives! is far more than a widow's tribute to her departed husband. It is a living relic of a now lost musical age; a menagerie of musings on love, fate, mankind's inter-connectedness, and the vacuity of widowhood." - Adam Kolczynski, Managing Editor and Author at Polybius Books

» “A Musical Love Story.  ". . . a meticulously crafted memoir . . . an exceptional look back at the unique lifetime of a humorist who also happened to be one of the most outstanding musicians of his time. It will take you through the whirlwind life that was shared by the author and her soul mate through more than four decades of the nostalgic pinnacle of musical times in America. Every reader of this book will be as entranced as I was." - Sam Denov, author of Symphonic Paradox–The Misadventures of a Wayward Musician

» “Harry and I played many concerts together in the percussion section of the Grant Park Symphony Orchestra, and if ever there was a ‘character’ deserving of a book about his life, Harry certainly would be at the top of my list. He was a man that many of us looked up to not only as a musician during a particularly colorful era in Chicago's rich musical history... but also as a man with a unique sense of humor that helped him meet many of life's twists and turns with grace and sometimes ‘stubborn’ grace. This is a loving and humor-filled chronicle of the life of an individual who will make you laugh and cry whether you knew him personally or not and whether you are a musician or not. This drummer ‘really drove’ and anyone who wants a great read should hop on for this ‘ride.’” - Jim Ross, Chicago Symphony Orchestra  (*Amazon removed this 5-star glowing review because Harry and Jim worked together.)

» “I have neither been to Chicago, nor do I have a passionate interest in music. But by the end of the first chapter any doubts about enjoying the book had been cast side. I was engrossed. 'Drummer' is a book about the life of a man ... neither famous nor infamous, and closer to poor than rich. But what is so inspiring about this simple story of his life is the freshness and vitality with which it is told by his wife ... It quickly becomes apparent that this is a love story: a story about people in love with music, in love with life, and in love with each other. It is also the story of a journey, and by recalling with affection many of the little idiosyncrasies of that journey through life ... it is probably the journey of your life, and that of everyone. Read it!" - Ptolemy

» “One of the most inspiring books I have ever read - it grabbed my heart! Harry was much more than just a master musician. He was a hero to many, and he went on to master LIFE as he faced and conquered obstacles that would have discouraged and defeated many an ordinary man ... Barbara makes Harry come alive to the reader ... the book is an awe inspiring love story that makes 'Romeo & Juliet' seem dreadfully unrealistic, phony, and pompous.” - George Edwards, aka "Professor Swing"

• Gary Matts, President, Chicago Federation of Musicians Local 10-208, A.F.M.: “. . . a true life tale of the travails of life with a freelance musician as only those who have lived it can tell it. The Drummer Drives! is a wonderfully well written documentation of a time in Chicago's musical entertainment history that is gone forever. It should be required reading for those young percussionists starting out who want to know what the music business was like at that time and how it has evolved to its present state.”

• Tom Morgan, Percussive Notes, newsletter of the Percussive Arts Society: “. . . a story of perseverance, creativity, fortitude in the face of great challenges, and a love commitment between a husband and wife that weathered storms and celebrated victories. It is full of humor and wit from Harry Brabec himself in the form of letters, comments, and jokes he made over the years. It also chronicles what the music business is like and what it takes to ‘make it.’ This is a must-read for students who are planning to follow a similar road in life, as they will learn about perseverance, organization, integrity, and the basic skills needed to be successful as a performing musician. They will also see how a strong marriage bond makes all the difference when life in the music world gets difficult.”

• Chicago Symphony Orchestra Insider's Newsletter:  “. . . a colorful and deeply personal memoir about her late husband's life, including his tenure with the CSO and his often stormy relationship with Music Director Fritz Reiner. THE DRUMMER DRIVES! Everybody Else Rides recounts a thirty-year period of Chicago's musical entertainment history, offering amusing anecdotes shared by friends and musicians who knew or worked with Harry.”

• Rob Cook, Rebeats Publications: “As a publisher specializing in percussion history, I regularly receive drummer biography manuscripts. More often than not, they either do not have much of a story to tell or do not tell it very well. It is very refreshing to see one that made it to print that not only has something to say, but says it well. For folks who knew either Harry or Barbara, are gigging musicians, or are interested in the music business, this book is a must.”

• Midwest Book Review: “An excellent and recommended read for anyone looking for a musical memoir. “There's more to drumming than hitting things randomly. The Drummer Drives! Everybody Else Rides: The Musical Life and Times of Harry Brabec, Legendary Chicago Symphony Percussionist and Humorist is a biography of Harry Brabec by his loving wife Barbara, who reflects on his journeys of life through the world of music. An enjoyable read about professional musicians, The Drummer Drives! is excellent and recommended for anyone looking for a musical memoir.”

• Bookviews by Alan Caruba: “The wife of a noted percussionist and virtuoso snare drummer, Harry Brabec, pays him tribute with her memoir and biography, The Drummer Drives! Everybody Else Rides. I have known Barbara Brabec for many years as the author of small business guides, but I was surprised to learn she had married Harry in 1961, in the wake of his dismissal from the Chicago Symphony Orchestra in 1956 by the imperious conductor Fritz Reiner. It destroyed his career as a symphony musician and caused the failure of his first marriage. This highly entertaining memoir tells of his comeback and how he encouraged her entrepreneurial ambitions. ‘Neither of us ever imagined that I’d someday write a book about my life with him,’ says Barbara and we can be very happy that she did. Musicians or those related to one will thoroughly enjoy this book.”

What Other Percussionists and Musicians Have Said

•  “A great nostalgic ride for any musician! The book took me back to my jobbing days in Chicago and I was once again booking gigs, moving drums, hanging out at Frank's and Bill Crowden's place, coming home late after working downtown at the opera, or the symphony ... Great fun!" - Tom Siwe

• “I'm a drummer/percussionist so I know the 'feelings' Harry went thru. The feelings Barbara went thru? She wrote them clearly and with passion. So you will relate to this book as a fellow human being ...  The drummer's driving and you're riding and you'll be happy indeed with this read." - John-Hans Melcher

• “Harry Lives! "If you are a musician, someone who loves to laugh, someone who wants to read a good love story ... heck, if you've got a heartbeat, then pick up this book." - Richard Sherrill

A Note from one of Harry’s students 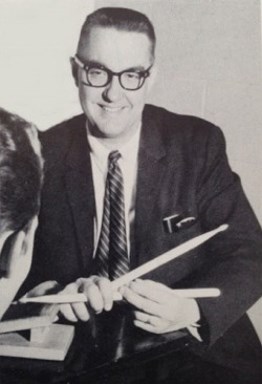 LATER, ALAN WROTE to tell me he was a student of Harry’s at North Park College in 1964-65. “Being a piano major, I needed to learn the rudiments of snare drumming. He was a very patient instructor! Since North Park was an extremely conservative school, I found Harry to be like a breath of fresh air. I greatly enjoyed his irreverent humor and the stories he told. While we weren’t friends in the social sense, I still regard him with the same fond affection that I do with old friends. Reading your book was like visiting an old friend and sharing laughs. I thought you might like a picture of Harry from the 1965 North Park yearbook. I’m the student in front of him.” (Of course I LOVED getting this picture of Harry as a teacher.)

* NOTE: In 2019, without an explanation other than “our rules have changed,” Amazon began to remove many reviews from countless author's book pages, including three of my 5-star reviews published in 2010 by verified buyers and book reviewers. (Fortunately, I’d copied them into a document for my own reference.)

Back to The Drummer Drives book page