Cats rule in any house they occupy, and we mere humans must adjust our lives accordingly. But they can sure cause concern or trouble for their owners by doing what comes naturally to them.

ONE DAY IN A CHAT with my nephew, Jeff, we got on to the topic of how much cats like to satisfy their curiosity by jumping up on something to get a better view. That prompted me to dig through the animal articles reference folder I’d started back in the sixties. One was an excerpt from 20,000 Cats in My Life, a book by a Park Avenue vet published in 1962 (now out of print) that I was delighted to rediscover and read again.

“Cats are supposed to be able to jump to a table without first seeing what’s on it and orient themselves so quickly that nothing is disturbed,” the author wrote. “This is true; I’ve seen them do it. I’ve also seen cats jump onto tables and fall into soup bowls, knock over salt shakers, and send the silverware flying before getting their bearings.” 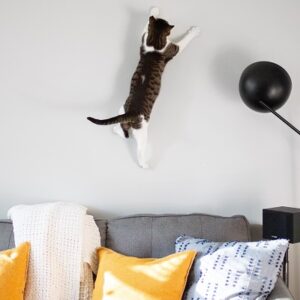 Photo by Sarah Schull on Unsplash

I learned in the above-mentioned article that cats have more than 500 voluntary muscles and about 233 bones, and they have the ability to leap several times the length of their body, both up and forward at the same time. That reminded me of a story about my sister Mollie’s Siamese cat, Cocoa, who always jumped on her desk to get to the high window with a nice ledge just right for her to see the world from a different viewpoint.

The Leap that Brought the Police

“We had a new phone, and it had a feature where you could just press ‘1’ and store it into memory so you could get 911 in a hurry,” Mollie remembers. “One day the doorbell rang and it was the Police asking what the emergency was. “There’s no emergency,” I said, and the cop said, “You dialed 9-1-1.”

“No, I didn’t,” Mollie protested. But the cop said there were penalties for those who dialed 9-1-1 when there wasn’t an emergency. So Mollie talked fast and explained about the phone, saying that the cat always jumped on the desk and must have hit the one-button on the dial on her way to the window sill. The cop found this hard to believe, but went away saying, “This is very bad. Don’t let it happen again.” 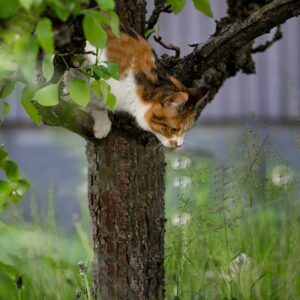 “I climbed up . . . but how do I get down?”
Photo by Dorothea Oldani on Unsplash

Sometimes cats get themselves in a situation where getting up is easy, but getting down takes some consideration. The first time my cat figured out how to get to the top of my china cabinet, I watched as she pondered how to get down safely.

“Sure I can crawl up that tree,” a cat might think, but I remember stories in the old days of how people used to call the Fire Department because their cat was stuck way up on the top branches of a tree and they had no idea how to get him down. I love this photo, which shows a cat seemingly pondering whether to jump down or not. (The caption is mine.)

Even on ground level, a cat’s curiosity can get them or us into trouble. Somehow I taught my cat, Charlee, to stay off my computer keyboard, but occasionally she stepped on a telephone button on her way down from my desk. But that’s better than the bad habit she had when I first brought her home. One day she chewed through the little thin wires on a set of my cassette headphones I had left on my desk. For awhile, I was afraid she might chew on electric cords or telephone wires; thankfully that never happened. I was glad when she outgrew this phase.

In my “cat conversation” with Jeff, he said his cat, Sony, tried to eat anything string like—broken rubber bands, twist ties, string, Christmas ribbons . . . but never cords or cables, perhaps because they were always plugged in and didn’t have floppy ends. “Sony was also fond of cellophane,” Jeff recalled. “Whenever I bought a CD, I had to unwrap it carefully, keep every bit of it in my hand, and throw it away immediately, otherwise a moment’s distraction would see him sneaking off with a piece to eat (and later un eat).

“Ever notice how cats take a keen interest whenever you move things around in the house?” Jeff asked. “If they notice something’s changed, they’ll study it from every angle, recalculating routes and trajectories.”

NO MATTER HOW OFTEN I did this sort of thing—emptied a paper shopping bag or left an open box on the floor—my cat, Charlee, would get into it just to see what might be inside. I’ve learned that in their own way, both cats and dogs talk to their human friends through their eyes, ears, tails, and general body movements. And when we communicate with them, they understand far more than we might first realize. With a change in my voice, or a hand gesture or body stance, Charlee immediately knew whether she had done something I didn’t like or that I was happy with her.

In discussing this topic with Jeff, he said the answer they’re really looking for from us is “Yes, master.” He added, “Certainly cats rule in any house they occupy, and we mere humans adjust our lives accordingly.”

Many years ago, I saw this picture on the web and saved a copy to my computer because it touched my heart. I looked then and now hoping to find the photographer that snapped this picture, but I could find nothing even remotely close to the name attached to the JPG image, which was “hiss-tine-chapel-paw-of-god.” It’s clearly a cat trying to communicate with an interested human. I didn’t caption it so each viewer can imagine what the cat was hoping to get from its outstretched paw. 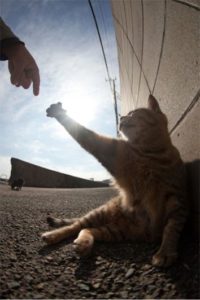 “For all the independence that cats show, they still reach out toward us because they want our love.” – from the book, 20,000 Cats in My Life.

My Family’s Cats and Dogs. Little stories about some of the cats and dogs Barbara and her sisters grew up with.

Back to
Cat & Dog Tales