My Family’s Cats and Dogs

My Family’s Cats and Dogs

The Schaumburg home always had one or more cats around, and the family dogs got along well with any cats in residence at the time. 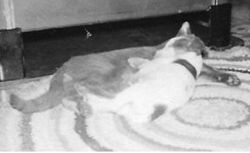 Candy liked to nap with this kitty.

PRIOR TO GETTING A DOG we named Rex—who had a long life in our home—there was a little dog named Candy that Mother never wrote about in her memoir. We have no recollection of what happened to him, but my sister, Mollie, remembers that one of the stray cats had a litter of kittens and then disappeared, and Candy nursed those kittens until they were old enough to be adopted. 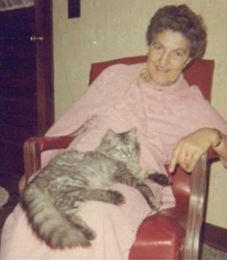 Mother’s cat, Hitchie, found on the road while they were camping,

The cats in our home were usually those someone in town didn’t want, or strays that found their way to our front porch or otherwise crossed paths with my folks. One of those was named Hitchie. Found in a tree in the sixties when my folks were camping, they rescued this hitch-hiking cat and gave him a great home. He proved to be a loving lap cat for Mother.

Sister Mary once called our home “a stray catcher,” and she was right. And we were surely the only family in town that ever adopted a baby squirrel after it fell out of a tree by our church. He turned out to be one of the most fun and entertaining house pets we ever had.

IN A MEMOIR NOTE for 1970, Mother wrote, “The latest news is that we have a new cat. When I went to the garage this morning, right on the front steps was a tiny kitten, a three-colored pussy cat. I don’t want it, but it is so poor and tiny that I brought it in and fed it. I suppose we’re stuck with it now. I don’t know how all the homeless orphans find this place, but they always seem to.”

“One cat just leads to another.” – Ernest Hemingway

I was born and raised on a farm near Buckley, Illinois. Daddy always had cats on the farm, so any cats that found their way to our door in town were welcomed and allowed to come and go as they pleased, generally living by their wits and on mice readily available at the grain elevator. None of the early cats who found refuge in the house or Daddy’s garage had the luxury of a litter box, a special bed, or commercial cat food, because there simply was no money for such things. But any cat that happened to be in the house at supper time was offered table scraps. 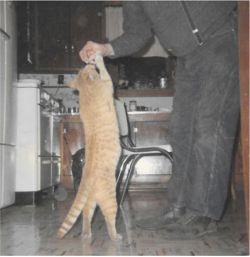 My father’s cat, Tinker, begging for a treat

SOME CATS STAYED LONGER and were loved more than others, such as Daddy’s beloved Tinker, who was as much at home in the garage as he was in our house. Daddy who owned Buckley Motors, hated to leave Tinker in the garage when they traveled, but his best friend made sure his cats had a supply of dry cat food and water there. The garage had a special “cat hole” for entry—all cats welcome at any time.

As near as I could tell, Tinker probably joined the family around 1952 and lived until 1969 when Mother noted in her memoir that he had disappeared.

DADDY’S GIFT TO MOTHER on their 45th Anniversary was PeeVee, and he was such an unusual cat that Mother memorialized him in her memoir and in several diary notes and letters to us and even took him to a vet once. A pet in our house would never have been allowed to suffer, but trips to a vet were rare because money was always tight.

In talking to Mollie about our dog Rex, I asked if she ever remembered him having his toenails trimmed. “Nope,” she said, “he obviously wore them down naturally with all the running about he always did outdoors. He was never sick and in need of medical care, but I know he would have received it if needed, no matter the cost.”

Because my sisters and I were raised with cats and dogs about, we naturally had pets as adults, but through the years my sisters and their children have had many more cats than dogs. I “inherited” a cat named Angus shortly after I was married that my husband, Harry, tolerated but never had any affection for. He just joked to his friends that Angus was “big enough to throw a saddle on.” The cat did amuse him, though, by always greeting him at the door and then rolling on the floor in front of him. So Harry got used to coming in and saying, “Roll over, dumb cat,” as if he’d taught him this trick.

As this cat’s new mom, I was told I had to feed him ONLY raw kidneys, but I didn’t like cutting up the bloody things. In time I found a good home for Angus where he was very much loved.

A few years later after moving to Missouri, Harry and I rescued a dog from the woods of Missouri that seemed like a gift from God. My memoir about how found this dog and taught her dog to communicate with us will be published as soon as I can find time to finish it. (See BOOKS for Call of the Heart: A Rescue Dog’s Dream.)

The Story of PeeVee, Marcella’s Rebellious Cat. In her diary notes and letters, Mother wrote more about PeeVee than any other cat she ever had.

A Dog and Cat Love Story: Rex and Tinker—An endearing story of canine love for a feline friend.

Back to Cat & Dog Tales T/C