Which Inning Are You in Now?

MY FATHER—WILLIAM J. SCHAUBURG (1907-1982)—was crazy about baseball all his life. He used to watch the White Sox play on television while also listening to the Chicago Cubs game on a portable radio. He meticulously recorded each player’s hits and runs in a dog-eared book he kept in his pocket, and nothing got him as excited as a ball game that went into extra innings. Knowing that he thought he had only a short while to live as he approached his 76th birthday, I made a special card for him that he seemed to appreciate a lot. It read:

If we were to compare our lives to a baseball game, it would mean that for every ten years of our lives we’d be in a new inning. So it follows that I’m now in the bottom of the fourth and you’re in the bottom of the seventh, which means we’ve both got some good innings left to play, and the final score is anybody’s guess.

Always remember that the last couple of innings of any game are often the most interesting and exciting parts of the game. And don’t forget how often the final score surprises both players and the audience alike.

So, dear old dad o’ mine, have a happy birthday and keep on swinging! But if you don’t get a hit, be satisfied to walk. It’s easier . . . and the run scores just the same.

The way I figure it, as long as you can get your dander up and outshout the umpire (Mother), you can count on a lot more plays at bat.

WHEN I FIRST PUBLISHED this story on my website in 2003, the White Sox were still in first place and the Cubbies were in first place for awhile, too, before they began to lag behind. A sportscaster commented then that it had been a hundred years since both Chicago teams were this high up in the ratings this far along in the season, and I could imagine how excited my father would have been then, even when they lost.

Harry and my father at a Cubs ball game

As I was formatting this article for publication on my first site, I just happened to turn up this photo of my dad taken the day Harry and I took him to a Cubs game. Memory fails, but this was probably sometime in the seventies. (You can tell it was a long time ago because men were wearing white shirts and ties to ballgames in those days).

The hot sun was burning Daddy’s balding head so I loaned him my golf cap for the afternoon and snapped this picture, never realizing then how precious it would be when rediscovered a few decades later.

After Daddy died in 1992, Mother found a newspaper clipping in his wallet, where he had carried it for years as a reminder of the days when his beloved White Sox were on a winning streak. It reads, “White Sox sprint past Orioles for 8th in row.” (You can see this clipping in the memory box I made of his life, pictured in the article linked to below.)

I don’t watch baseball games now that Harry is gone, but I did note in 2005, the year he died, that the 2005 World Series was the 101st edition of Major League Baseball’s championship series, a best-of-seven playoff between the American League (AL) champions Chicago White Sox and the National League (NL) champions Houston Astros. The White Sox swept the Astros four games to none in the series, winning their third World Series championship and their first in 88 seasons.

Despite the series being a sweep, all four games were quite close, with two games decided by one run each and the other two games by two runs each. How I wish Daddy and Harry could have seen that game! (Why do I get the feeling that I won’t live long enough to see the White Sox win another World Series?)

BELOW . . JUST ONE MORE IDEA for how to “make a memory” of your father if you happen to be artistic in drawing or painting. When I was about 20 and into oil painting, I did a small painting of my father’s garage and gave it to him for his birthday. He treasured it all his life and, after his death, Mother gave it back to me for safekeeping.

Bill in his Buckley Motors garage with our dog Rex and his beloved cat, Tinker taking in some sun.

If you decide to give a nostalgic gift like this, be sure to write something to accompany it, as this will make the gift all the more meaningful. In this case, my painting included a little poem:

A friendlier place there’s never been found,
in Buckley, or Paxton, or any old town,
than Schaumburg’s Garage, with its warm confusion,
where an interruption is not an intrusion.

It has always been cluttered, with dirt on the floor,
but this doesn’t matter when you walk through the door.
You can usually find a friend that you know,
and you’re welcome to stay until you want to go. 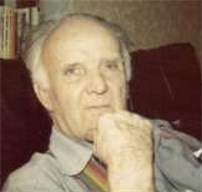 How to Make a Father’s Memory Box. How to make a unique memory box for your father or for yourself in remembrance of him with ideas for incorporating both photos and small personal items he treasured.

Life Wisdom from Yogi Berra. Wondrous things can happen each time you take a step in a new direction.