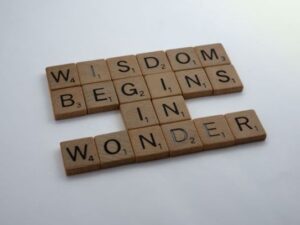 Photo by Brett Jordan on Unsplash

“Wondrous things can happen each time
you take a step in a new direction.” – Barbara

As I continue to learn new things as a widow and entrepreneur, I remain in awe of the kind of things that happen each time I take ONE step in a new direction, meet a new person, ask questions, or ponder my options in one area of life or another. Every new thing I’ve ever learned or done has usually led to something else that came as a surprise, and everything I’ve been learning and doing lately has been leading me in unexpected new directions as an individual, writer, and business owner on the web. Sometimes these new steps have saved me money; other times they have paved the way to new income opportunities.

The new ideas that present themselves as I continue to move through life are sometimes mind-boggling to me, and I often recall this great tip from Yogi Berra: “When you come to a fork in the road, take it.”

Lately, in observing how everything everywhere is changing on a daily basis, I’ve decided that Yogi was years ahead of his time when he wryly observed that “The future ain’t what it used to be.”

After sharing a couple of my favorite Yogi Berra quotes in one of my email Bulletins, Louise Saulnier sent this message:

“When the work day is quickly rolling by and I haven’t finished what I wanted to do, I’m reminded of another of Yogi’s quotes: ‘It’s getting late early tonight.’ It makes me giggle and I realize that I’m not the only one in this predicament. It also makes me realize that the work will still be there tomorrow. Thanks to Yogi’s wisdom, I don’t sweat the small stuff anymore.”

Do you know that there is an official Yogi Berra website? As the site proclaims, Yogi “has moved from a giant in the sport to a cultural icon, whose ‘yogi isms’ are quoted by everyone from young children to Presidents of the United States.”

In 1998, Yogi Berra was posthumously awarded the Presidential Medal of Freedom, the nation’s highest civilian honor.

Life is Like a Baseball Game. Which Inning Are You in Now? This article reflects on Barbara’s father’s love for baseball and the Chicago White Sox. Includes stats of their World Series wins and related stories and photos.

Back to
Stories TC