The Story of a Farmer-Turned-Mechanic in the Fifties

Barbara Brabec remembers the legacy of her father, a farmer-turned-mechanic in the fifties, and his entrepreneurial spirit in building a home and business in the small farming community of Buckley, Illinois. 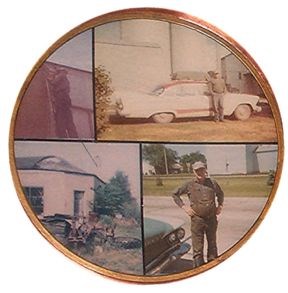 MY FATHER, William J. (Bill) Schaumburg, was a farmer in the Midwest when he met my mother in 1931. After they married in 1935, he rented 160 acres of poor farmland south of Buckley, Illinois. Starting with a Fordson tractor, he got a $1,000 government loan to buy seed and equipment. Later from money earned by shucking corn for two cents a bushel, he bought two cows and two horses.

Like many farmers in his day—most of whom were poor and still struggling to survive after the war—he became adept at fixing farm equipment and household items in need of repair. That included the family car. He taught himself how to repair a car by literally taking one apart and putting it back together again.

In the above collage of photos, you see Bill “in his element” in front of his Buckley Motors garage as he looked in his daily work clothes—much the way he had always dressed as a farmer. At the top right, he stands proudly in front of his new red-and-white Plymouth in 1959. At left is a pile of junk in front of the garage’s front door waiting to be hauled away. A frugal man, Bill never threw anything away that could be recycled or sold as scrap. “Everything has value,” he believed. 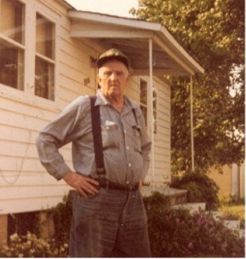 Bill in front of our house, with his garage in background.

After he finally quit farming in 1944 and moved into Buckley, he decided he knew enough to start a garage business to repair cars and tractors. He bought two lots alongside the Illinois Central Railroad, one for the house he and his dad would built for us, the other for his garage. By 1947, the house was still a work-in-progress but the garage was open for business, and Bill had all the work he could handle.

(At left, a photo taken in the fifties showing Daddy in his standard work clothes. Need I say he hated to wear a suit?)

I LEARNED A LOT from my hard-working father. He taught me and my two sisters that with a little effort and self-study, one could learn how to fix most anything that was broken. Since I’ve been self-employed for most of my adult life, perhaps my most valuable inheritance from him was his entrepreneurial, self-sufficient spirit. He never made much money in his life, but he certainly made a lot of friends, and his only regret here was that he outlived all but one of his closest friends.

The following dedication appeared in six editions of my best-selling Homemade Money book, first published in 1984, now out of print. Although I told Daddy I was going to dedicate that book to him, he didn’t live long enough to see it in print:

“Unlike his children, my father did not have the benefit of a good education. Yet he was smart enough to teach himself what he needed to know to make a living, first as a farmer and later as an auto mechanic and repairman who never met anything mechanical he couldn’t figure out.

“With little more than talent, determination, and a belief in himself, he built his own home and garage business in the small farming community of Buckley, Illinois, where he lived until he died in 1982.

“As children, my two sisters and I did not realize that our father, by example, was quietly instilling in each of us his work ethic and entrepreneurial spirit, but as three entrepreneurial women, we certainly know it now.”

Bill in his Buckley Motors garage with our dog Rex and his beloved cat, Tinker taking in some sun.

WHEN I WAS ABOUT twenty, I did the above oil painting of my father’s garage and gave it to him for his 76th birthday. Mother said he treasured it and bragged about me when he showed it to all of his friends. After his death, she gave it back to me for safekeeping, and my younger sister Mollie will get it eventually because she practically grew up in Daddy’s garage since Mother was working full time then. 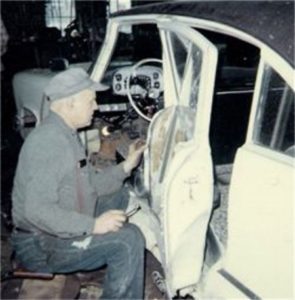 At right, Bill is fixing the car Mollie was driving to work the summer before she left for college. Broadsided by a reckless driver in town minutes after she pulled out, she was lucky to escape physical harm because the driver’s side of the car was mashed in. The story of the valuable lesson her daddy taught her that day—one she never forgot—is recounted in my memoir, Marcella’s Secret Dreams and Stories, in the chapter about what it was like to grow up in the small Midwestern farming community of Buckley, Illinois. 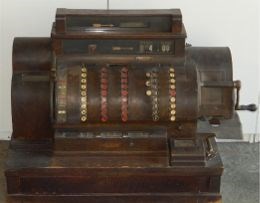 Bill liked to buy things he liked but didn’t really need, and he may have thought this cash register would impress his customers. It was a fixture in his garage that he never used for financial transactions, but one he couldn’t resist buying. Made in 1923, it weighs 400 pounds. Its serial number is 2070307; model number 912 (2) RS-E (designates that it was electric or crank).

Mollie and her husband Jim carted this monstrosity from Illinois to California after Daddy died. “It worked when I was a kid,” she said, “but it doesn’t work now. I remember he used to keep nuts and bolts in the drawers.” 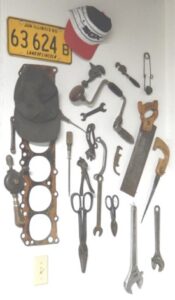 For a long time this was a decorative feature and great conversation starter on the fireplace hearth in the Wakeman’s family room. Now relegated to a spot in their garage, Jim wonders (hopefully) if someone might steal it if he were to leave the door open some day.

AT RIGHT: Mollie had a special connection with her Daddy, and being very nostalgic she kept this unusual collection of smaller things he loved. Daddy would have loved knowing it now hangs in the Wakeman’s garage.

How to Make a Father’s Memory Box. How to make a unique memory box for your father or for yourself in remembrance of him. Originally published by Barbara Brabec in her Making Memories column in Crafts & Things magazine.

Life is Like a Baseball Game. This article reflects on Barbara’s father’s love for baseball and the Chicago White Sox. Includes stats of their World Series wins and related stories and photos.

Back to
Family & Friends T/C