A Dog and Cat Love Story

A Dog and Cat Love Story

This endearing story of canine love for a feline friend tells how the Schaumburg family dog, Rex, grieved for his lost feline companion, Tinker.

IN A NOSTALGIC CONVERSATION with my mother in her later years, she talked about the special relationship of Rex and Tinker, who she said were the best dog and cat she and Bill ever had. This male dog and tomcat played together. slept together, and ate together. 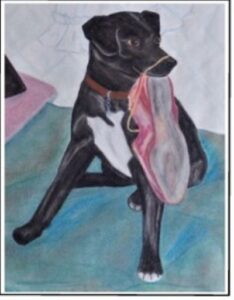 Rex entered our family when my sister, Mollie, was nine and said she wanted a dog for her birthday. Someone in town had some puppies that needed a home, so Daddy picked a little black one he liked. It was a mixed breed with some Bull Terrier and Labrador retriever in him, so Daddy called him a “Heinz 57” dog. Mollie loved him and named him Rex. He quickly became an important part of our family.

In Mother’s private memoir for the family she wrote, “Rex was a very smart dog who loved to play, and his sense of time was amazing. He soon learned when the kids had recess at school and would run down there in the mornings to be with Mollie. The teacher called me one day and said I had to do something about that dog because when the kids went out to play ball at recess time, Rex would get the ball and run with it and the children spent all recess period chasing him. I was gone to work all day and couldn’t do a thing about it.”

NO ONE REMEMBERS now exactly when or how Tinker entered the family, but Mollie knows it was sometime after she left home for college. Rex would have been about nine years old then and, missing Mollie, he naturally would have welcomed a new cat into the family. As Tinker grew up, he got special attention from Rex and the whole family. I made him the special bed-in-a-basket pictured above, and Mother wrote about him in her letters and diaries.

“Tomcats always did kill kittens,” she said, “but not Tinker. He once brought a kitten to grandma, maybe one of his. When grandma saw the kitten in Tinker’s mouth she was scared it was dead, but of course it wasn’t.”

Rex had traveled everywhere with our folks on their annual vacations and on many side trips here and there, but a letter Mother sent to Mollie said how worried she was about taking him on their first camping trip to California.

“I dread the thought of having to take him along because he’s so old and fat now and can hardly get upstairs. Daddy hates the thought of leaving Tinker in the garage, but someone will feed him while we’re gone.”

In the end, Tinker got along fine in the garage, and Rex surprised everyone. After a month on the road and doing a lot of walking on their side trips, Mother reported that he seemed happy and had lost weight too. “Guess he just needed exercise,” she concluded.

In November, 1969 after a few years of happy companionship with Rex, Tinker disappeared. Mother told me she thought he had been shot by some kid with a BB gun. Rex and Tinker always ate the same leftovers from the same dish, and because they were true friends, Rex somehow decided that Tinker should eat first, and every night he’d sit there patiently until his friend was finished with dinner.

So the night Tinker didn’t come home and appear at the food dish, Rex just sat and waited . . . and waited . . . and then walked away. In fact, it was several days before he finally started to eat again. We all thought this to be an amazing expression of canine love for a lost feline friend and companion.

CURIOUSLY, Mother didn’t include a note in her memoir exactly when Rex died. In talking to sister Mollie about this, she told me that when she finally got around to asking Mother how Rex was doing, she learned that he had died not long after Tinker disappeared. We figured Rex was about fourteen years old then, and we all wondered whether he had died of old age or loneliness.

“Mother didn’t have the heart to tell me at the time because she knew how upsetting this would be to me,” Mollie said. “I’ll never forget the joy this sweet dog gave me as a child, and I know he continued to have a happy life with Mother and Daddy after I left. He sure saw a lot of country traveling with them.”

This article was adapted from Marcella’s Secret Dreams and Stories: A Mother’s Legacy.
Copyright 2017 by Barbara Brabec.

My Family‘s Cats and Dogs. Little stories about some of the cats and dogs Barbara grew up with.

The Story of PeeVee, Marcella’s Rebellious Cat.  In her diary notes and letters, Mother wrote more about PeeVee than any other cat she ever had.

Back to
Cat & Dog Tales