The Story of PeeVee 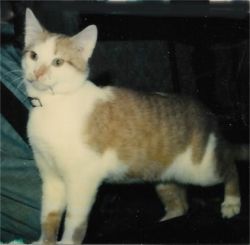 PeeVee couldn’t help himself. Even as a kitten, he was a challenge to manage, a cat seemingly born to be rebellious. He clearly had a mind of his own and he didn’t want anyone to tell him what to do or how to live. If trouble could be found, he would find it. He didn’t become the typical house cat Mother hoped he would be, but merely used our house as his home base to eat and sleep during the day so he could “cat around” outside all night.

MY MOTHER AND FATHER loved cats—dogs, too—but cats, especially. They lived on a farm after they were married, and I had many cats to play with as a child, as well as my dad’s beloved dog, Gene. When we moved into town, we lived across the street from the town’s grain elevator, so it was no wonder that stray cats mysteriously began to be drawn to my folks’ front porch. My tender-hearted mother never turned any of them away while my sisters and I were growing up.

For their 45th anniversary in June, 1980, my father brought a kitten home for mother. The following month, she noted in her diary that she had renamed the kitten PeeVee, short for piss and vinegar (sometimes abbreviated as P.V. in her future mentions of him).

“He is a wild cat!” she wrote one day. “Tore up the artificial flowers I had on the coffee table. Has probably killed my ‘dumb cane.’ He just shredded the leaves.” (Dumb cane is the common name for Dieffenbachia.) 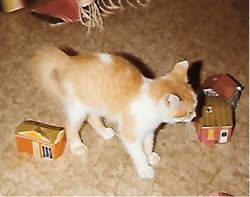 Pee Vee as a Kitten.

One morning Mother noted in her diary that P.V. had jumped on the bed and woke her up at 5 a.m., which she really didn’t mind because she got an earlier start on her quilting that day. On another day she wrote, “Bill took the storm windows out and set them on the ground. While I washed one side, PeeVee dirtied the other side.”

On the last day of December she wrote, “Reset some plants P.V. upset in the living room. Took an hour to clean up the mess!”

There were no mentions of P.V. in the 1981 diaries or letters until the following December, when Mother and my sister, Mollie, began to exchange cat stories in their letters. Following are clips from Mother’s letters to Mollie from that point on.

December, 30, 1981: “Poor old P.V. has a sore foot that has bothered him for two or three weeks. He sits and holds it up and walks on three feet. I think I may try to take him to Cissna to the vet today. I’ve got to get his foot fixed before spring or he won’t be able to cat around every night like he did last winter. I’d hate to look out and see five or six cats sitting on my front porch waiting for him and him not able to go!” (Understand that a pet in our house never would have been allowed to suffer, but trips to a vet were rare because money was always tight.)

Feb. 9, 1982: (Excerpts from a long letter about the horrific winter and how the deep snow was affecting PeeVee): “I just went to the door to let poor P.V. in. He will not use the cat pan, just sits at the front door and squalls. The only place he can find any dirt is at the elevator, so he goes high jumping through the deep snow all the way over and back about four times a day. I feel sorry for him, but then I think if he’s too dumb to use his indoor bathroom, just let him suffer.”

Feb. 16, 1982: “Because of so much snow this winter, we never did get P.V. to the vet and he still limps, but he’s busy every night taking care of the elevator cats.”

April, 16, 1982: “P.V. is still working hard every night. He eats his supper and goes out all night, comes in for breakfast and sleeps all day so he can stay awake all night while he roams around.”

May 21, 1982: “They have started picking up stray cats and dogs in Buckley again. Every time P.V. goes out, I tell him to watch out for the catnappers. If your pet gets picked up you have to pay the town $25 and promise to keep it penned up before you can get it back. They will have a hard time catching P.V. as he doesn’t like strangers, but it could happen, I guess. There are a lot of stray dogs running around town, but I don’t see what harm cats do, although I know you’ve had problems with your neighbor’s old cat.”

After Daddy died in October, Mother left to be with family for a month, leaving P.V.’s care in the hands of Mr. Grissom, his best friend.

November 22, 1982: “When I got home, I decided that sore on P.V.’s leg wasn’t going to ever heal so I put him in a box and tied it shut and taped it all over. Before I got a mile out, he was out of the box and behaving like a wild cat! I was really afraid of him. He jumped all over trying to get out of the car, squalling like he was dying. I stopped the car and tried to quiet him, but I couldn’t do much with him. I finally went ahead, but I didn’t take him out of the car at the vet’s. He just looked at him through the window and gave me some salve and an antibiotic to put in milk. When I got home and opened the door, P.V. jumped out and ran up on the porch to get in the house as quickly as possible. He acted scared all day but seems O.K. this morning.”

In the spring of 1983, Mother made plans to sell the house and move to Oklahoma to be with her brother. On May 24, after returning from a three-week trip there, she couldn’t find P.V., and since Mr. Grissom hadn’t seen him lately, she just knew he was dead.

In a letter to Mollie just before she moved, she wrote, “I never did find P.V. before I left. I’m afraid he got killed. I just can’t believe he took up with anyone else. He disliked kids and was always afraid of strangers. I was there from Saturday till Thursday and hunted for him every day, so I guess he is gone for good. I’ll sure miss him.”

Although PeeVee wasn’t destined to live long, he certainly added spice to our mother’s daily life. As an LPN, she had learned many years earlier the importance of accepting loss and death as a way of life. As a widow, she never had another pet of her own, but loved all the pets in her children’s and grandchildren’s families.

My Family’s Cats and Dogs. Little stories about some of the cats and dogs Barbara grew up with.

A Dog and Cat Love Story: Rex and Tinker. This endearing story of canine love for a feline friend tells how the Schaumburg family dog, Rex, grieved for his lost feline companion, Tinker.

Back to Cat and Dog Tales