Divinely Connected by the Marimba

Divinely Connected by the Marimba

HAVE YOU EVER CONSIDERED how some of the decisions you made in your youth dramatically affected your adult life? I’ve always been fascinated by how the threads of my life and Harry’s seemed to be tied together so many years before we met. In fact, we never would have met if I hadn’t fallen in love with the marimba when I was in the sixth grade. 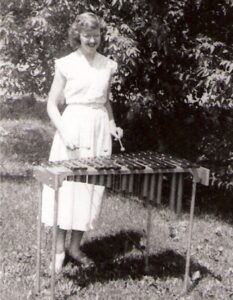 At right is the little instrument I began with. The legs came off and it was easily carried by a handle on the side. I played for many local functions and in amateur contests while in high school.

Prior to writing and publishing The Drummer Drives! Everybody Else Rides, I was known as a home business expert and author of several books on that topic with nearly forty years’ involvement in this industry. In all those years of writing, however, I never had occasion to talk about my other life back in the late fifties and early sixties when music was my passion and I was performing professionally in the Chicago area. In one chapter of my memoir, I’ve described the path I took that gradually led me to Harry and written about the lessons I learned as a novice entertainer and some of the cold realities of the music business in those days.

It was only during the writing of my memoir that I began to think about what Harry—who was ten years older than I—was doing at different stages of my musical life (an exercise other couples might enjoy exploring when they contemplate how they came to meet and marry). For example, in 1949 when I was twelve years old and had picked the marimba as my instrument of choice, Harry was performing in the National Symphony Orchestra in Washington, D.C. Shortly after I graduated from grade school in 1951, he was joining the Chicago Symphony Orchestra and getting married, believing that both his marriage and the job was for life.

Who could have imagined then that he would lose this job five years later because of a vindictive conductor who didn’t like him as a man? That was in 1956, the same year I was just getting situated in Chicago as a secretary and continuing my marimba lessons with James Dutton at the American Conservatory of Music. I was participating in his percussion ensembles and getting ready to present solo marimba recitals. In those days, I was living in the Three Arts Club girl’s club in Chicago, which was home to many artists, musicians, and singers who were allowed to make as much noise as they wished up until 10 o’clock p.m.

Years later I would learn how losing the Symphony job had destroyed Harry’s career as a symphony musician and ultimately led to the failure of his marriage in 1959, the same year I was just “breaking into the business” as an entertainer at women’s clubs, private parties, and weddings that needed background music. A short stint in 1960 as an entertainer at the Surf ‘n Surrey supper club on the South Shore made me feel like I had the world on a string. I didn’t know it at the time, but every musical step I had taken to this point was bringing me one step closer to Harry.

I HAD NEVER HEARD OF HARRY BRABEC until I got a call out of the blue in August, 1961 from this guy who was asking to meet me on a blind date at the suggestion of a mutual friend, a percussionist in the Chicago Symphony Orchestra and someone I’d previously dated. Three days later, Harry proposed and we married just 18 days after we met. I will always believe that the marimba was my divine connection to Harry and that only God could have orchestrated our individual journeys so we’d end up together in the same place at just the right time in both of our lives. (See Harry’s BIO here.)

I ceased performing after my last job in May 1962, figuring that one professional musician in the family was enough. But I was always grateful to have had a little taste of the music business before I met Harry because it helped me to understand what he was going through as he struggled to pick up the pieces of his personal life and make a living as a freelance musician.

My interest in playing the marimba even for my own enjoyment diminished considerably once I found my true life’s work as a professional writer. We kept the marimba until 2000 when Harry began to sell his instruments, and I thought it a good deal when we were offered twice what I had paid for it. But now that Harry is gone, I wish I’d kept it. I play a little piano from time to time, but every once in a while I yearn to once again hold four yarn mallets over a beautiful keyboard and bring forth the sweet melodious sound that only a marimba can make.

Based on a story told in The Drummer Drives! Everybody Else Rides.

Back to
Barbara-Personal Articles T/C