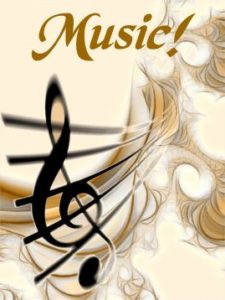 We All Need Some
in Our Lives

“Almost everyone recognizes the power of music, not only to express emotions but also to encourage them.” – Dr. David Jeremiah

“The bottom line of any country is, what did we contribute to the world? We contributed Louis Armstrong.” – Tony Bennett

• Backstage with the Legendary Ella Fitzgerald. A personal behind-the-scenes short story and picture of her autograph on a program.

“Music, when soft voices die, vibrates in the memory.” – Shelley

• Barbara Brabec, Marimbist and Entertainer [PDF]. Prior to becoming a professional writer—before she met and married Harry Brabec—Barbara Schaumburg had another life as a freelance musician in Chicago in the fifties and sixties. This tells her musical story along with that of her teacher, James Dutton, virtuoso marimbist (14 photos/illustrations).

• Big Band/Jazz Books in Harry Brabec’s Collection, with comments from some of the musicians featured in them.

“It don’t mean a thing, if it ain’t got that swing!” – Duke Ellington

• A Carson & Barnes Circus Memory. Barbara recalls one of the most memorable circus performances she ever saw, on the day Harry was invited to sit in with the Carson and Barnes Circus as it warmed up for the performance.

NEW: Chicago’s Great “Killer Snowstorm” of 1967. A reflective look-back at the worst snowstorm in Chicago’s history; how it shut down the city and affected everyone in the area, including Chicago Symphony Orchestra musicians.

• Divinely Connected by the Marimba. How Barbara’s grade school choice of a musical instrument led her directly to the man she was destined to marry.

“The ‘hot’ bands played big band jazz, but oh, those one-nighters! I’m sure I could build the inside of a bus blindfolded.” – Harry Brabec

• Harry Brabec, Humorist. “Anything for a laugh” could have been his motto. Get your laugh for the day in this excerpt from The Drummer Drives! Includes four “silly Harry” photos and stories guaranteed to bring a chuckle.

•  Harry Brabec’s Known Recordings. A wealth of LP recording history is documented in this article featuring albums by the Chicago Symphony Orchestra, big band and other band recordings, and classic percussion albums of the fifties and the percussionists who made them.

“Never look at the trombones, it only encourages them.” – Richard Strauss

NEW: Men on Courting Girls in 1946. A humorous interview with members of the Chuck Foster Orchestra when Harry was the band’s drummer and they were playing the Blackhawk Hotel in Chicago. Includes photo and copy of 1946 newspaper column.

“To be a musician is a curse. To not be one is even worse.” (Elsewhere Daney wrote, “Musicians are cursed pretty bad, with notes and patterns exploding through their minds, with little room for much else.”)  – Jack Daney, Trumpet player

• Musicians Who Wrote Memoirs [PDF]. Photos and info about musical memoirs in Harry Brabec’s collection, signed by musicians he knew.

• Show Drumming: Learning the Trade, Designing Your Setup [PDF]. An article Harry wrote in 1985, discovered among his papers after his death. It offers historical perspective and professional tips for today’s show drummers.

“You can’t possibly hear the last movement of Beethoven’s Seventh and go slow.”  – Oscar Levant, explaining his way out of a speeding ticket.

“Don’t bother to look, I’ve composed all this already.” –  Gustav Mahler, to Bruno Walter who had stopped to admire mountain scenery in rural Austria.

Back to
All Articles T/C