This story of the worst snowstorm in Chicago’s history tells how it shut down the whole city and affected everyone in the area, particularly the Chicago Symphony Orchestra musicians.

As Barbara writes in her memoir, The Drummer Drives, “In spite of the circumstances, there was a unique feeling of jollity in the air because this was a once‑in‑a‑lifetime experience for most everyone, and something that put all of us in the same sled, so to speak.”  The comparison of this storm to the  “Big Snow of 1979” and 2011’s “Snowmageddon” adds historical perspective.

THE HISTORIC FEBRUARY 1-2, 2011 “Snowmageddon” Groundhog Day Chicago blizzard that dumped 21.2 inches of snow over a period of 48 hours brought memories of Chicago’s “Killer Storm” of  ’67” to all those who were around at that time. It was even worse than the 2011 storm and one that affected Barbara and Harry in interesting ways.

With a snowfall of 23 inches, the great snowstorm of 1967 (called a “killer storm” because sixty deaths were attributed to it), remains the worst snowstorm in Chicago’s history. Although other storms have come close to breaking the record, they didn’t quite make it. To do that, the snow has to measure more than 23 inches at O’Hare Airport. But to anyone who was shoveling three-to five-foot-deep snow drifts the morning after this storm, the difference in inches hardly mattered.

Details of Chicago’s “Killer Storm” of ’67

IT’S INTERESTING TO COMPARE the statistics of the February 2011 blizzard with the storm in late January 1967. For the first time in the history of the Chicago Symphony, two concerts on Friday and Saturday had to be cancelled. It began to snow about 2 a.m. on Thursday, January 26, and snowed continuously through Friday afternoon, leaving 23 inches on the ground. (One newspaper report said all this snow weighed 24 million tons.)

By then, the city was literally paralyzed with no buses, planes, or cars moving. The airports and all expressways and the Outer Drive were closed, along with all schools and 95 percent of businesses. By noon on Thursday, hotels in the Loop were already filling up as many workers decided not to try to brave the roads home. Extra cots were put in many rooms and some people slept in hotel lobbies. Thousands of people who did try to drive home ended up abandoning their vehicles where they sat and taking off on foot. Few got very far because of the drifting snow, low twenty‑degree temperature, and fierce winds. Many commuters spent the night in a gas station, school, or church.

Some of the musicians in the Chicago Symphony Orchestra who lived in the suburbs and took a train downtown didn’t get home until Monday because their cars were literally buried in a train station parking lot, and streets were impassable to walk home. They either found a hotel room or slept in Orchestra Hall.

Harry was assistant stage librarian with the Chicago Symphony at this time, using public transportation on this particular day because of the impending storm. Had he been driving, he might not have made it home. The  “L” was still running when he left Orchestra Hall, but his near‑mile walk from the station to our apartment was very difficult due to waist‑high snow drifts by then and the fact that he had a very thin overcoat and wore no boots. (He never listened to me.)

Many commuters spent a very cold night in whatever bus or train they had been traveling in at the time. The airports were jammed with passengers whose flights were cancelled, and many office workers simply stayed in their offices. In one case, some fifteen factory workers spent Thursday night there only to learn the next morning that they were trapped by snow drifts so high in front of all the doors and windows that they couldn’t get out. I heard them plead on a radio station for someone to come and dig them out, or at least bring some coffee and food for the duration they might have to stay there. I felt sorriest for people who needed ambulances, mothers who had to give birth at home with instructions by telephone, and homeowners whose houses burned to the ground when fire trucks couldn’t get to them.

Stocking up on Groceries after the Storm

LIKE EVERYONE ELSE, Harry and I figured we ought to go to the grocery store early Friday morning to buy a few groceries to get us through the week. (You know Harry by now—food was always high on his list of priorities.) It wasn’t too cold or windy then, so we could really appreciate the artistry of snow drifts that high, still so white and beautiful at that point. People had not yet begun to shovel sidewalks, and the alley we waded through had drifts as high as a car. But Harry just jumped into them like a Bohemian jackrabbit and I jumped in after him and we laughed ourselves silly in the process.

I think Harry and I did more walking the first three days after the storm than we usually did in three weeks. We walked to Kroger’s each day and brought home a sack of groceries apiece, but some people went overboard. The first day as we neared the grocery store, we saw people in every direction as far as the eye could see, either going to or returning from the store. Their shopping bags, sleds, and toboggans were all laden with groceries as though they were never going to be able to buy food again. Ten and twelve loaves of bread were purchased by single customers, along with gallons of milk. In some parts of the city the food hoarding got so bad that many mothers who desperately needed milk for babies couldn’t purchase it. Some stores rationed milk, bread, and eggs, but Kroger didn’t. In spite of the circumstances, there was a unique feeling of jollity in the air because this was a once‑in‑a‑lifetime experience for most everyone, and something that put all of us in the same sled, so to speak. Kids were especially happy. Pulling groceries on a toboggan was pure fun for them. 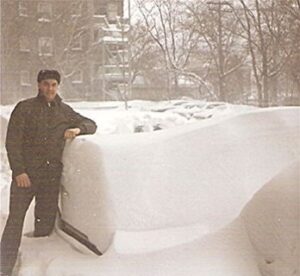 Because there was a growing concern in the city that many oil trucks might not get through to replenish supplies, we bought an electric heater just in case. We didn’t run out of heat, but our car was so buried in the parking lot that we could hardly identify it (only the antenna was showing). Even after Harry got it shoveled out, it took several days before the parking lot itself felt the blades of a snowplow and the oil truck could make its delivery to our building.

By Monday, the city had a handle on the storm and the Orchestra took the train to Milwaukee for a concert that evening, figuring the instrument truck could get through by then. The Tuesday and Wednesday concerts were presented in Orchestra Hall as usual, but people would be talking about Chicago’s great snowstorm for years to come.

For an archive of photographs of the aftermath of Chicago snow storm, see the Chicago Tribune’s page of amazing pictures. 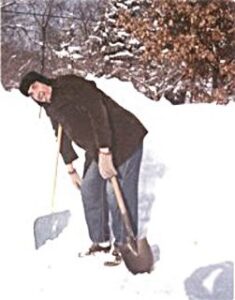 AN EARLIER STORM IN 1979 currently holds fourth place in the list of Chicago’s ten worst snowstorms with 20.3 inches of snow, but this one was especially memorable for me and Harry. We were living in the country then, and the snow blew and drifted high everywhere, piling up around or house to the point where we almost felt trapped. For several days, our dog, Ginger, could barely get outside to do her business. Thankfully, the sliding door in the lower level opened up to a foot-wide area protected from snow by the roof’s overhang, which gave Ginger just enough room to walk a ways and turn around to get back inside quickly.

Harry shoveled himself to exhaustion trying to clear a path from our door and the driveway, but it was several days before our lane and the roads were plowed. We were thankful to have a good supply of food on hand at that time.

This story first appeared in Barbara’s memoir and biography, The Drummer Drives! Everybody Else Rides—The Musical Life and Times of Harry Brabec, Legendary Chicago Symphony Percussionist and Humorist. Copyright © 2010, 2021 by Barbara Brabec.