What Time Is It on Your Cell Phone?

What Time Is It on Your Cell Phone?

On this particular day, Barbara simply couldn’t get it all together in one of her Brabec Bulletins, and her subscribers weighed in with sympathy and their own humorous stories about being time-challenged and never knowing what day or time it was. 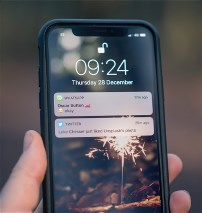 Photo by Jamie Street on Unsplash

IT’S CLEAR THAT a lot of people seem to be “time challenged.” In fact, I’m beginning to think that the only people who always know what day and time it is are salaried employees who have to punch a clock, so to speak. For the benefit of new readers who missed my unique three-Bulletin series in 2009, let me summarize.

I first wrote a regular business Bulletin on Wednesday, September 4, accidentally dating it September 11 and talking briefly about how this day in 2001 had so dramatically impacted our lives. I realized my mistake while I was eating lunch, only because I was thumbing through TV Guide and had just turned on the news in time to hear Sarah Palin say, “One week from today, September 11, my son is going to Iraq.”

I almost choked on my sandwich when I realized I had just moved the calendar up a whole week and made myself look stupid (not for the first time), so I quickly sent a brief correction to that message. I had the month and day right on that Bulletin, but didn’t realize until a reader told me that I had not only dated the first Bulletin 2006, but had dated the correction to it as 2007. I suddenly had a new understanding of the old saying, “A day late and a dollar short,” and gave myself a chuckle when I realized I’d done a rather creative version of this by being a week early and a year or two short.

As I began to receive humorous messages from my readers about this, I found myself collapsing in laughter and just had to write a third message of the day that included a few of the emails I’d received by that time. Several more soon followed, and some of them were pretty funny and well worth sharing in this updated article.

WROTE ELIZABETH, “I didn’t notice the incorrect year, and you had me wondering, ‘Wait! What happened on September 4th? Am I that removed from reality? Whew! Before the correction, I was going to ask for the winning lottery numbers.”

My old friend Sam, now retired from corporate employment but as busy as ever, wrote, “I look at the fax/copier to get the date, at the calendar to see which day of the week that date falls on, and at the TV cable box to get the time. If I’m bright enough to think of it, I get my cell phone and find all three pieces of information on its home page.“

Time really does fly when you’re working and enjoying what you do. Terry Kralik, Moose Country Quilts wrote, “Love your messages, Barbara. I can relate. It was noon today before I realized that the piece of bread I had put in the toaster at 9:00 was still there, partially toasted and dried. I had completely forgotten to eat breakfast, but was famished by noon—the ‘toast’ worked fine in a grilled cheese sandwich.”

If truth be told, it was 2:54 p.m. that day before I realized I hadn’t had lunch because I had gotten wrapped up in social networking on LinkedIn. So my Bulletin was further delayed by the need to grab some cheese and crackers as an appetizer before dinner. (I have never been a clock-watcher, so if I forget to set an alarm to remind me to stop for dinner, I sometimes rely on my cat, who often hits my desk with a dinner-MEOW alarm when she’s hungry.)

“I ask my wife what day it is so often she doesn’t think anything of it,” wrote Dennis, Boogiejack.com. “A lot of times when I write a check I’ll ask the cashier something like, ‘Is this the 20th?’ When the cashier tells me it’s the 22nd or 23rd, I just shrug and tell ’em I must have really overslept. Those of us who live outside of the usual 9 to 5, Monday-through-Friday routine are special. I like to think we’re timeless . . . already living in the eternal now.”

“I was delighted to know that I’m not the only time-challenged person on the planet,” wrote my dear friend Sylvia. “I guess you could say that we hold you to a higher standard, but I prefer just looking at it as being so human. I love that laughter is the great equalizer.”

“You really made me laugh today,” said Carrie, Fireside Design Studio. “I’m relieved to know there are others just like us who have no idea what day it is. I used to check the time/calendar on my computer when I needed to know. Then last year I bought a fancy-pants watch that displays the date, day of the week and time. If I put two fingers on it, I get my pulse reading, too! The funny thing is, I can look at that watch and then five minutes later need to look again as it just doesn’t stick to my brain. I guess one can get away with that when one works at home. Like you, I watch the calendar more carefully if I have an appointment (or a birthday) coming up, but otherwise the date is almost irrelevant. I can imagine a lot of people would be jealous that we have this luxury. Maybe it’s both a blessing and a curse. Today it was just too funny.”

I REALLY APPRECIATED the messages from readers who assured me I wasn’t alone. As Karen wrote, “Heck, Barbara, I thought I had lost a week. It’s happened before. I, too, live alone with my cats, my computer, and my gardening. Looking at a calendar doesn’t usually narrow it down. I have to find out what day it is by clicking on the date/time at the bottom of the computer screen.”

But I had a good excuse for my faux pas. At the time of this unusual writing experience, I was joking with my sisters about how my burning the candle at both ends was affecting my memory. On this particular day, I could also see how it was affecting my writing. For the previous month, I was working 12 to 14 hours a day, 6-1/2 days a week on the writing of my first memoir, something that was literally consuming my life (happily, I might add) to the point where that was all I wanted to do. But as I’ve often warned my readers, you can only push yourself like this for so long before you just fall apart. (I’ve told the rest of this story about the writing of The Drummer Drives! Everybody Else Rides in “Four Months on a Tank of Gas” [PDF].

I’M SOMEWHAT OLDER NOW than I was when I wrote the three Bulletins referenced in this message and nothing about time has changed, except that it seems to be slipping through my fingers much faster than it did a decade ago. I’m still passionate about my work, but I never work more than 8–10 hours/day at the computer now and actually take part of every weekend off (meaning “off the computer”). As I’ve done all my writing life, I never pay attention to what time it is, and I’m grateful now to be able to work as long as I wish, which is usually when I have a good stopping point in my writing. With no one here to remind me it’s time to fix lunch or dinner, my eating hours are erratic, to say the least.

But this works for me, and I love working and “going with the flow,” wherever each day’s time takes me. I hope that you feel like you’re being productive in whatever your work or passion happens to be and that you take time to occasionally give yourself a pat on the back when you’ve met the day’s expectations for yourself.

How to Find Enough Time for Everything. Our goal must be to make every minute count, and as we’re counting, we should also keep reflecting on what we’ve accomplished to date.

Humorous Stress-Busting Strategies. Many find it a constant struggle to find ways to build in some downtime to relieve stress and just have a life