Harry Brabec’s Lifelong Love Affair with Books
A story of Interest to Bibliophiles and Book Collectors. 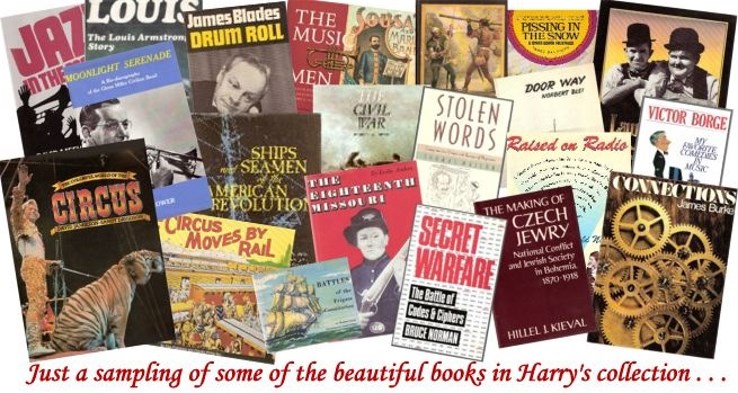 “I’m an avid reader, and I just keep buying books and never find the time to read all of them. “I swear I will get to the book you sent me next week. All my reading material is stacked nice and neat, but it’s beginning to close in on me. Barb is suggesting that we put a sign on our front lawn telling people that this is the Brabec and Brabec bookstore. The house seems to be bursting at the seams with books and magazines we haven’t read yet.” – Harry, in a letter to a music buddy.

MUSIC WAS HARRY’S MISTRESS, but he loved his books with the same kind of passion. His parents couldn’t afford to buy books for him when he was young, so it was a thrill, he said, when the bookmobile came around to his school. As an adult, he wanted to own as many books as possible, and he treated all of them with loving care.

Harry was a true bibliophile, but I never though of him that way until I began to study his book collection after he died. Although I had looked at those books for years and handled many of them each time we packed for another one of the many moves we made during our lives together, I wasn’t aware of the vast range of topics he had an interest in.

His book collecting began right after we married in 1961, and it included some of the finest and most sought-after books in several topic categories. He had a passionate interest in big band books as well as military bands and band books and music, particularly those related to the U. S. Marine Band and the circus. Nostalgic books on his shelves included all of the books written by Norbert Blei, a Czech who wrote about many places and things familiar to him as one born and raised in the Chicago area. He also had a good collection of books about Czechoslovakia, fine art, literature, humor, and many history books, particularly those relating to ships and the sea, the Civil War, and World War II. He was fond of Custer, too, and I recall one time when I came up with an original Custer joke that he liked.

“What state was Custer in when he died?” I asked very seriously.
“That’s easy,” he said. “He died in the Battle of the Little Bighorn in Montana.”
“Nope,” I said with some smugness. “He died in a state of PANIC.”

I usually played the straight man for Harry’s jokes, so when I could “get him” with one of my own, he was very proud of me.

I’ve always liked to highlight content in my books so I could find the best parts later without having to reread the whole book, but Harry never turned down a page, never made a mark in one of them, and never cracked the spine of a book. If I so much as picked up one of his books, he’d sass me about handling it with care. In fact, each time I asked to borrow his huge Webster’s dictionary, he’d joke that it would cost me a quarter because then he knew I’d be careful turning the pages.

Harry and I had entirely different reading interests. I read only a few of the books he bought, and he never read any of mine. But seeing the colorful spines of all of Harry’s books on our shelves in the living room all those years was very comforting to me. I had no idea what a rewarding experience it would be to list Harry’s best books on Amazon, because this meant that I had to handle each book and actually look carefully at it, inside and out, in order to write an accurate description of its condition for listing on Amazon. I suddenly found myself interested in reading some of those books before parting with them.

Trivia and the English Language

HARRY ENJOYED ALL KINDS OF TRIVIA. He was always wondering why this, or why that, so he was an avid buyer of books such as David Feldman’s When Do Fish Sleep?, Who Put the Butter in Butterfly?, Imponderables—The Solution to the Mysteries of Everyday Life, and How Did It Begin?, the latter of which is a fascinating study of the superstitions, customs, and strange habits that influence our daily lives. His collection also included Why Do Dogs Have Wet Noses?, Do Clocks Run Clockwise?, A Hog on Ice & Other Curious Expressions, and many other unusual books with interesting titles. Clearly, Harry shared Bertrand Russell’s belief that “There is much pleasure to be gained from useless knowledge.”

Of course books that made him laugh were high on his list, and he especially liked Lewis Grizzard’s books, including Shoot Low, They’re Riding Shetland Ponies, and Chili Dawgs Always Bark at Night, whose titles were funny to begin with.

His passion for reading led him to read many books related to language itself, from the origin of words and sayings to how to speak it correctly, such as Anguished English: An Anthology of Accidental Assaults Upon Our Language by Richard Lederer, and Is There a Cow in Moscow—More Beastly Mispronunciations and Sound Advice by Charles Elster. As a writer, I enjoyed these books too.

The above is adapted from Barbara’s biographical memoir, The Drummer Drives! Everybody Else Rides—The Musical Life and Times of Harry Brabec, Legendary Chicago Symphony Percussionist and Humorist.

AS YOU MIGHT IMAGINE, one of my big jobs after Harry died was to figure out what to do with everything he owned. in my memoir, I talk about his many files, notebooks, scrapbooks, and magazine and newsletter collections (he saved everything), and especially his thousands of books, CDs, VHS tapes, and cassette tapes as well, the latter of which had no market at all when he died. But I sold the bulk of his books and CDs, and most of his VHS tapes as well, even though they, too, were considered obsolete in 2008 when I first started listing items on the Amazon Marketplace.

If you’ve inherited a collection of books or records or are trying to downsize your life and would like some encouragement for selling that collection on Amazon, read about my experience in the article, “Selling Books and CDs on Amazon Marketplace.” By doing this, I made enough money to landscape my front and back yards with some left over.

Big Band/Jazz Books in Harry Brabec’s Collection – with great quotes from the musicians featured in them. (Goodman, Bix, Hamp, Armstrong, Ellington, Basie, Krupa, and others.)

Musicians Who Wrote Memoirs [PDF]. Photos and info about musical memoirs in Harry Brabec’s collection, signed by musicians he knew.

Back to
Books T/C