Backstage with the Legendary Ella Fitzgerald

Backstage with the Legendary Ella Fitzgerald

Barbara Brabec remembers the day
she met “The First Lady of Song.” 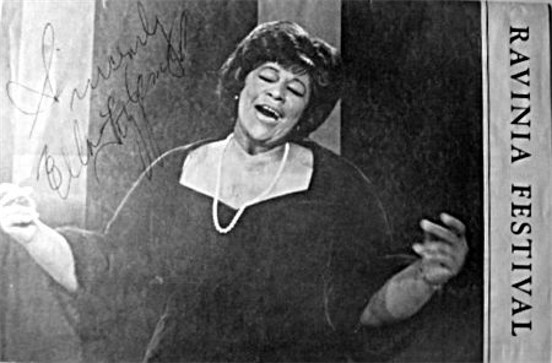 Ella Fitzgerald’s autograph on one of her programs.

DURING MY  YEARS as Harry Brabec’s wife, I met many well-known musicians and famous entertainers—so many, in fact, that I couldn’t have remembered all of them without my journals and letters as reminders. But I’ll never forget my brief meeting with the legendary Ella Fitzgerald because she was such a presence—such a magnificent singer!—and an entertainer Harry said was “a real sweetheart to work with.”

I met her in the summer of 1966 when she was appearing with the Chicago Symphony Orchestra at that year’s Ravinia Festival. Harry was Assistant Stage Librarian at the time, so he was always backstage speaking with the performers. He wanted me to meet Ella, so on the day I went to hear the concert, he took me backstage when she was on a rehearsal break so I could say hello and get her autograph on my program.

It was hot, and she looked tired and sweaty. She had her feet up on a chair and didn’t move a muscle when Harry brought me into the room. She was just as down-home as one could get. Of course by now Harry had charmed her sox off, along with her shoes.

“Hi, honey, how are ya?” she said when Harry introduced me. I don’t remember what I said to her, but she seemed happy to give me her autograph, and I’m sure I must have said what an honor it was to meet her before Harry ushered me out of the room after a few minutes so she could rest. But I could see that she liked Harry by the way she smiled when she spoke to him. He did have a way with people.

IF YOU ENJOY READING backstage stories of famous people in the music industry, get a copy of The Drummer Drives! Everybody Else Rides: The Musical Life and Times of Harry Brabec, Legendary Chicago Symphony Percussionist and Humorist.

In addition to stories about my private life with Harry, you’ll learn much about the Chicago music scene in the forties and fifties before I met him. Here are his remembrances of the days when he was playing with the big bands and doing recordings in Chicago, his comments about many of the musicians, entertainers, and conductors he worked with through the years, and the backstage, behind-the-scenes stories I heard about him from friends and fellow musicians when I was doing research for this book. It covers Harry’s whole life, both the happy and sad times, but it ends with an Encore chapter of his original humor that will leave you laughing and feeling glad to have read it.

Adapted from The Drummer Drives! Everybody Else Rides.