Drumming with the Chuck Foster Orchestra in the Forties

Chuck Foster Orchestra in the Forties 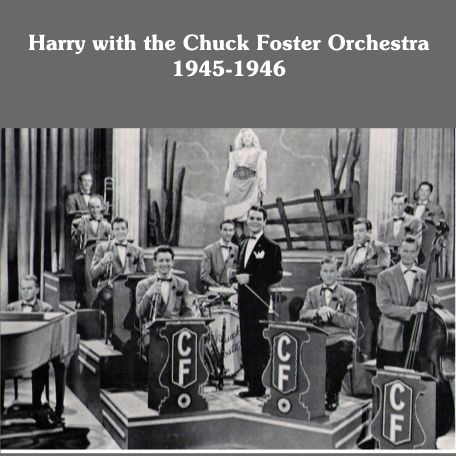 THIS ARTICLE includes some of Harry Brabec’s remembrances of working with this band and its members. It’s adapted from Barbara’s memoir, The Drummer Drives! Everybody Else Rides, which includes several of Harry’s reminiscent letters about his years with the Chuck Foster Orchestra (1945-1946), his personal experiences with the band, Foster’s “quirks,” background information on band personnel, and the time the whole band almost quit en masse over a problem with Marilyn Paul, Foster’s girl singer at the time. (Shown onstage in above photo.)

Following is a brief excerpt from one of Harry’s letters in the big bands chapter of the book:

“I joined the band February 19, 1945 as Chuck was leaving the Blackhawk Restaurant in Chicago. In fact, at that time, Chuck was revamping his band from three saxes to four, and that’s when six sidemen joined, along with two vocalists. We went out on a bunch of one-nighters, sort of a shake-down cruise, playing such locations as St. Louis and New Orleans. In July of that year, we went to the New Yorker. Of course, from the time I joined the band until I left, there were many personnel changes.

“It was a good, tight band with a lot of good musicians, and we always worked with no layoffs. I remember that a guitar player was let go the day before I and four others joined the band. Foster did away with the guitar chair so he would have more money to hire some better players. I also remember I was making $90 a week, which was pretty good money compared to what the sidemen in the swingin’ bands were making.”

THE PHOTO BELOW was taken before the Chuck Foster Orchestra left the Blackhawk and given to Barbara after Harry’s death by his cousin, Arlene Lechich (nee Strejc), a harpist who also went to J. Sterling Morton High School with Harry and played in the school band and symphony orchestra. 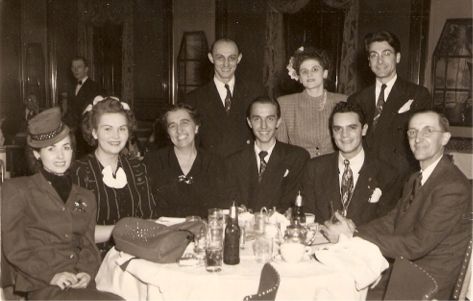 From the smile on Harry’s mother’s face, it’s easy to see where Harry got his great smile. He and his mother also shared identical and very prominent Bohemian noses. Harry adored his mother and was devastated by her death from pernicious anemia four years after this picture was taken. When his father married Della Pennar two years later, Harry was so upset with him that he stopped all communications with him and did not resume this relationship until he and Barbara were married in 1961. 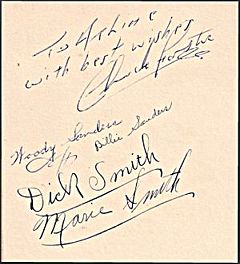 I so regretted that Harry never saw the above picture after it was taken and given to Arlene as a souvenir of the evening. After losing all his photographs during his divorce (a sad story in the book), he never acquired another picture of him with both of his parents.

BELOW: Harry with two of his orchestra friends. That’s Woody Sanders on piano, Dick Smith in the middle, and Harry. This photo wasn’t dated, but Harry looks older here, so it may have been taken when Foster was stuck for a drummer a few years later and he sat in with the band for a week when it was at the Martinique Night Club in Chicago. He wrote about this in one of his letters: “I lasted only a week. By then, the style of the band had changed and my playing style also changed, so it was like oil and water—we didn’t mix.”

HARRY MADE several soundies with Foster, three of which were on YouTube for a long time before being removed because of third-party copyright violations. This excerpt from The Drummer Drives! offers some history on soundies in general and this one in particular:

“Soundies were displayed on a coin-operated film jukebox machine called a Panoram that was usually found in night clubs, bars, restaurants, factory lounges, and amusement centers. The forerunners of the music video, their era ended in 1947. These three-minute musical films were produced in New York, Chicago, and Hollywood, and covered all genres of music, featuring leading bands, orchestras, singers, and movie stars of the day. More than 1800 of the soundies’ mini-musicals were eventually released to home video.”

In this amusing, last-surviving 1940s video soundie of the Chuck Foster Orchestra on YouTube, you get a few glimpses of Harry playing drums and Marilyn Paul singing “Harriet.” It’s obvious from the opening that Harry was trying not to draw attention to himself behind the drums, which is how he always performed throughout his life. Offstage, he loved being the center of attention, but onstage his iron-clad rule was, “Lay down the beat, but keep your head down and your arms close to your side.”

Sonny LaRosa—one of Harry’s friends from his Chuck Foster days—told me, “Foster always began to play by looking at Harry and saying, ‘Hit it, Harry!’ as he gave his downbeat.”

Another excerpt from The Drummer Drives:

“I still remember how excited and thrilled I was the day Harry opened a package from Sonny LaRosa . . . and found a videotape of one of the soundies he had made with the Orchestra. On playing it, we saw that it was the exact scene from the album photo, right down to the vocalist on stage. (She was a stitch . . .) We had to view the film in a mirror to see the recording the right way. As Harry explained to me, it took two cameras to get the finished product onto the jukebox-like machine, which meant it went from a normal picture to a reversed print, then back to a normal picture on screen.”

After Harry died, a friend took the VHS tape and returned a DVD of it, which of course I treasure.

If you’ve enjoyed this story adapted from The Drummer Drives! Everybody Else Rides, check out the book that reviewers have called:

“. . . an exceptional look back at the unique lifetime of a humorist who also happened to be one of the most outstanding musicians of his time.”

“. . . a backstage peeks into the lives and personalities of the entertainers of the period and the politics of the music scene in Chicago at the time.”

Men on Courting Girls in 1946. A humorous interview with members of the Chuck Foster Orchestra when Harry was the band’s drummer and they were playing the Blackhawk Hotel in Chicago. Includes photo and copy of 1946 newspaper column.

Show Drumming: Learning the Trade, Designing Your Setup [PDF]. An article Harry wrote in 1985, discovered among his papers after his death. It offers historical perspective and professional tips for today’s show drummers.

More about Chuck Foster and the history of Soundies and their appeal today:

Chuck Foster “For the Dancers” (on Big Band Library).