How Times Have Changed!

A humorous interview with members of the Chuck Foster Orchestra when it played the Blackhawk Hotel in Chicago in 1946.

Adapted from The Drummer Drives! Everybody Else Rides
Copyright © 2010, 2020 by Barbara Brabec

I DIDN’T TURN UP this amusing interview until I was researching my memoir about Harry in 2010, some 64 years after it happened. It was a treasure to me then and a good example now of how our dating culture has changed through the years.

As I was putting the finishing touches on my memoir, Loren Binford called to say he’d found something I’d want to see. After he’d shared a wealth of historical information on Chicago’s jingle business in the forties and fifties (in Chapter 7 of my book), he took the time to do a little research at the library, where he turned up copies of several newspaper articles from the forties that mentioned Harry’s name. One of them from March 29, 1946 gave me a hearty chuckle and a colorful bit of music history to add to the book.

Maryon Zylstra was then writing a column for the Chicago Daily Tribune called “The Inquiring Camera Girl” that paid $5 for the most interesting questions submitted to her by readers. The question under discussion in this day’s column was “Do men do the courting or do they only think they do?”

To get the answer, she visited the Blackhawk Restaurant in Chicago where Chuck Foster and his Orchestra were performing with Harry on drums. She queried Foster, Harry, vocalist Betty Clarke, bass player John Kalish, saxophonist James Hefti, and Herman Belli, alto sax.

Each of the men gave responses that now paint an amusing picture of how different things were back in the forties. Betty Clark seemed ahead of her time because she was thinking then pretty much the way many women think today—basically that a woman can always wrap a man around her little finger if she uses the right technique and also lets the man think he’s chasing her.

Of course it was Harry’s response that I found so charming and amusing in light of our own whirlwind courtship, which is described in the book. Getting this old newspaper article also gave me some new perspective for one section of chapter 4, “On Being Czech,” that was based on my interviews with two of Harry’s high school girlfriends he had courted (more about him that I didn’t know until I began to write the book). Here’s what Harry had to say on the topic of courting girls when he was just nineteen years old:

“At first, I believe, the fellow courts the girl. He picks her out and tries his best to get acquainted with her. Then after he knows her quite well they both do the planning. Some girls are very difficult to get to know, though, and demand a lot of courting.”

Harry had certainly refined his “getting acquainted” skills by the time we met, and clearly I wasn’t one of those girls who demanded a lot of courting, because he proposed three days after we met and we were married two weeks later. Below is an image of the newspaper article so you can read what the other musicians had to say on the topic of courting. It’s sure to elicit a few chuckles from men and women alike. 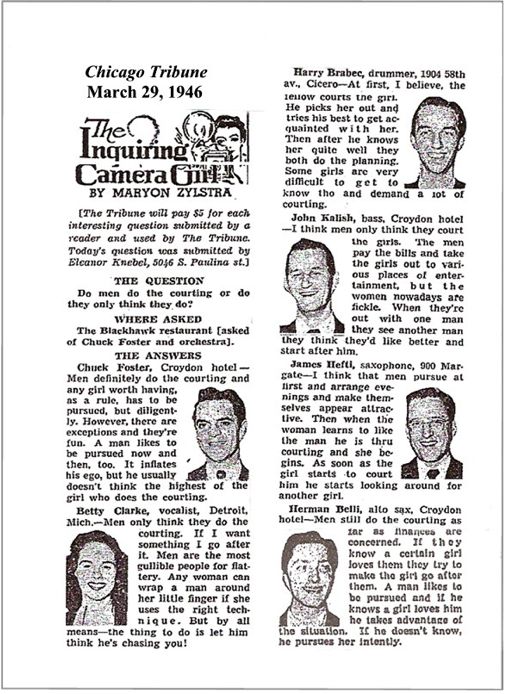