A wealth of LP recording history is documented in this article featuring albums by the Chicago Symphony Orchestra, big band and other band recordings, and classic percussion albums of the fifties and the percussionists who made them. Adapted from the author’s biographical memoir, The Drummer Drives! Everybody Else Rides.

HARRY MADE COUNTLESS RECORDINGS through the years as a jazz drummer or percussionist with various big bands, radio and television orchestras, symphony orchestras, and other groups. This is merely a listing of some of the recordings on which his playing can be heard today, with notations of the instruments he said he was playing. Many of the percussionists of that era are also mentioned in this article.

You can hear some of these albums or selected music from them on YouTube. Just search for the album label name and label shown in the listings below. Repeat the search on Google to see images of most of these albums.

HARRY WAS IN THIS Symphony from 1946 to 1949 with Hans Kindler, conductor. The Orchestra made several 78-rpm recordings for RCA while Kindler was there, so Harry would have been playing on some of these recordings. Regrettably, none of them found their way into his record collection.

THE FOLLOWING LIST includes only some of the many recordings the Chicago Symphony Orchestra made during the years Harry was in the Orches­tra or performing there as an extra percussionist. As he indicated in one of his letters, “In recordings made from 1951–1956, I am usually playing snare drum or mallets.”

During the sixties and seventies, Harry acquired a small collection of Chicago Symphony recordings on vinyl that he made with Fritz Reiner or Rafael Kubelik in the fifties. After dubbing some of these albums to tapes for me and friends, I asked him to tell me what instrument he was playing in each recording. Given his steel-trap memory, even after so many years I didn’t doubt that he remembered exactly what he was playing in each of the recordings documented below.

Many vinyl albums lack any reference to the date or even the year a recording was made, but I have included dates I was able to verify through Web research or album notes.

Kubelik/Chicago Symphony (Original recording on Naxos label; reissued on Mercury SRI 2-77006). Kubelik made many recordings with the Chicago Symphony on the Naxos Classical Archives label during Harry’s tenure with the orchestra, but this is the only one that found its way into his LP collection:
Smetana: Ma Vlast (Recorded in 1952; Harry on snare drum).

Solti/Chicago Symphony (London CSA-2227).
Mahler: Symphony No. 6—Songs of a Wayfarer (Recorded in 1970. This album has a picture of the Orchestra, with Harry on bass drum.)

Harry made several “soundies” with Foster, three of which were on YouTube for a long time before being removed because of third-party copyright violations. There remains one surviving video soundie of the Chuck Foster Orchestra with Harry playing drums and Marilyn Paul and band members singing “Harriet.” (See Related Article below for more about soundies and Harry’s time with this orchestra.)

Wayne King Recordings (1950). In a reminiscent letter in 1999, Harry wrote that a friend of his in a recording studio had sent him copies of the LP recordings he did with King on November 12, 1950 at the Edgewater Beach Hotel in Chicago. No other details are known. 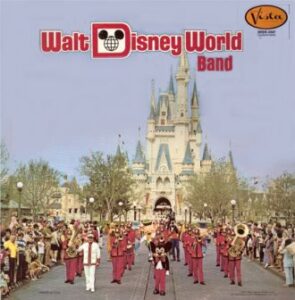 Walt Disney World Band (Vista STER-3337) . This souvenir album released in 1972 by Disney World includes a collection of recordings made on different dates between the park’s opening and the album’s release. Harry is playing bells in “Seventy-Six Trombones” and may be heard in the marching band as well. (See the book for stories about Harry’s time at Walt Disney World.)

Heritage of the March (Vol. 71–J. Pecsi–E. Stolc). This particular album in Harry’s LP collection came to my attention only because his picture was on the cover, along with his old friend, Boyd Conway, plus other musicians who made the recording. The album includes several marches of Josef Pecsi and Emil Stolc. Recorded in 1981 by Foeller’s Illinois State Alums and Friends with George Foeller directing the band.

Harry often played with “Foeller’s Easter Bunnies” through the years and may have been on other Heritage of the March recordings in his collection (which numbered about 200). This was a series of band music albums created and funded by Robert Hoe, who traveled the world in search of marches. The Navy Band in Washington, DC made the first Heritage series, and the Naval Academy Band recorded four. A number of universities and other service bands made recordings as well. Apparently, many of the vinyl albums are now available on CD. (I have a box of these LPs that I’d like to sell. Interested buyers, contact me here.)

Bensenville/Wood Dale Concert Band. All concerts of this band are recorded live, and many can be heard on the band’s website.

DAVID CARROLL made Percussion in Hi-Fi in 1956—the first of two classic David Carroll percussion albums on the Mercury label. Harry was one of six percussionists working alongside Sam Denov, Bobby Christian, Frank Rullo, Dale Anderson, and Hugh Anderson. At that time, Bobby Christian and Frank Rullo were the city’s most sought-after percussionists for jingles and recordings. (See Chapter 7 of The Drummer Drives! book for more info on Chicago’s jingle business in the forties and fifties.)

Sam and Harry were Chicago Symphony musicians doing recordings when they weren’t playing with the orchestra. Hugh was a percussionist friend from Harry’s high school days when they were both participating in drum contests. Hugh (and his brother, Dale) attended Lane High School and, like Harry, had studied with Roy Knapp. Harry and Hugh had also worked in the same arena at CBS and NBC in the fifties.

An email on the web from Brian Phillips commented on this classic album, saying, “This is a fantastic album and not just because I enjoy drums. The tunes are great (‘Jungle Drums,’ ‘Discussion in Percussion,’ ‘Malaguena’) and the arrangements are lively. The record­ing is indeed impeccable. If you see it and pass it up, imagine Dick Butkus. In a dress. Singing. And then tackling you.”

I like the story Harry told me about the recording of “George Washington Slept Here.” To get the right sound of the drum fading into the distance at the end, they put him on a dolly and pulled him offstage while he was playing. It’s fun to imagine this scene as you listen to this particular tune. As I was dubbing these albums to CDs, I found myself thinking that “Old drummers never die, they just fade away.”

Author’s note: Dick Shory was one of the few percussionists named above who was both alive and still active in the business when I fist published this document on TheDrummerDrives.com website (which closed in November of 2014). A percussionist in the Chicago Symphony when Harry was there in the fifties, Dick moved easily from the Symphony into recording studios and conducting and went on to become a major influence on both classical and popular percussion music.

Adapted from Barbara Brabec’s biographical memoir, The Drummer Drives! Everybody Else Rides: The Musical Life and Times of Harry Brabec, Legendary Chicago Symphony Percussionist and Humorist. (See Chapter 8, “The Chicago Symphony Years”\,” for many behind-the-scenes stories about symphony musicians and conductors Fritz Reiner and Rafael Kubelik.)

Drumming with the Chuck Foster Orchestra in the Forties. Harry’s remembrances of working with this band and its members, adapted from the book.