with an Update on Today’s Carson and Barnes Circus

In The Drummer Drives! Everybody Else Rides, I’ve written about the time Harry was invited to sit in for a few warm-up tunes when the Carson & Barnes Circus was playing in our area. What follows below is only a bit of the behind-the-scenes circus story told in my memoir. – Barbara

I HAD JUST BEGUN TO WRITE my memoir about life with Harry when clarinetist Jim George purchased a couple of Harry’s CDs on Amazon and we had an enjoyable email exchange about his days of playing with Ringling Bros. and Barnum & Bailey Circus (RB&BB) when it was in San Diego. I had never thought about how hard circus music was on a reed man’s lips, but I could understand how the thrill of playing would make it worthwhile.

Harry would have given up payment for the privilege of performing just once with the RB&BB Circus, but that opportunity never came his way. Having played his first circus when he was in high school and falling in love with that kind of music, he was thrilled to be a part of the Windjammers Circus Band in his later years of life. He was never happier than he was the day he was invited to sit in with the Carson & Barnes Circus band as it warmed up for the performance. This was also the most memorable circus I ever saw.

CARSON & BARNES was once the largest animal show in the world. At the time of this particular performance in Naperville, Illinois, they had nineteen elephants, several camels, horses, bears, tigers and lions, plus a rhino and other assorted animals. While Harry was behind the drums, I was sitting nearby, right alongside the chute where the Bengal tigers raced by into the center ring and the path the elephants and other animals used to go in and out of the tent. I was excited to be so close that I could have reached out and touched the tigers, had I dared.

Harry and I loved the performance and he was tickled to have been able to play a few tunes before the show, but it was the elephants that stole the show after the performance had ended. It had been raining that day, and now it had begun to pour, so most of the audience hovered inside around the open circus flap to watch the elephants. Imagine nineteen elephants chained in two rows in a grassy area strewn with straw but now muddy from all the rain. The more it rained, the more the elephants strained at their chains in an effort to get nearer to the little puddles of water that had begun to collect around their feet.  When they did, they began to spray one another with the water until we were all in stitches.

As it continued to pour, I could only imagine the mess there would be for the evening show only three hours later. How the handlers managed to put the fancy sequined garb on these wet hunks of flesh to get them into the big parade that evening is anyone’s guess. To this day, I don’t know why I took pictures of Harry that day, but neglected to photograph the elephants. Thankfully, the scene is burned into my mind. 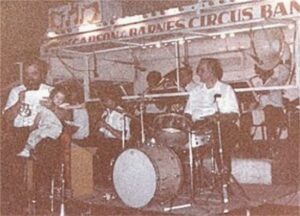 At right: Harry on the drums with conductor Bill Reynolds,  one of his pals from the Windjammers Circus Band, holding his daughter (at left). “Born in a trunk,” so to speak, she was already doing acrobatics and hanging from things at this young age and was about ready to begin work on the trapeze.

Below: A close-up of Harry, having a wonderful day with an old friend. 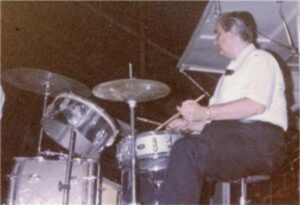 AFTER HARRY WAS GONE, some friends invited me to attend a performance of RB&BB circus in an indoor stadium in Chicago, and it was extremely disappointing to me. The loud rock music drove me nuts, and I was disappointed to see there was just one ring with a grand parade that had none of the glitz and glamour of the old days. The elephants had no robes―just a little headpiece―and I wasn’t at all impressed with the rest of the costuming, or even the tiger act, which had always been my favorite part of a circus performance. (No one could ever compete with Gunther-Gebel Williams as far as I was concerned.) I vowed then to never attend another circus unless it was a small local one, preferring instead to watch one of Harry’s old videotapes of what real circuses were like “back in the day.”

Had Harry lived to see the days when the circus died—on May 7 and May 21, 2017, when Ringling Brothers gave its last performances of the blue and red units of the “old-time circus” that we both loved so much—I’m sure he would have shed heartfelt tears of regret. Frankly, I’m grateful he didn’t have to endure this emotional pain.

For an outstanding and nostalgic commentary and editorial by journalist Teri Silver on what really brought the curtain down on RB&BB, read “The Demise of Ringling Bros. and Barnum & Bailey” (August 2018).

In this writing, Silver articulates the feelings of the many people who were shocked, mad, disappointed, and sad, writing, “Losing this show is, and will continue to be, a time of mourning for Americans and circus lovers around the world. And it is more than just an end to an era; it is the loss of tradition for audiences and the performers themselves.” 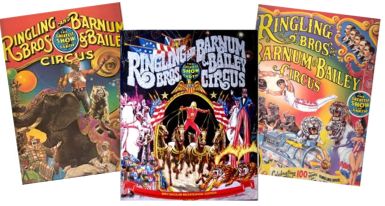 I treasure the 9×12-inch colorful circus programs (pictured above) that Harry and I always bought when we went to the circus, some with glittered covers and full-sized circus posters stapled in the middle, all offering a sneak-preview of what the show had to offer that year. 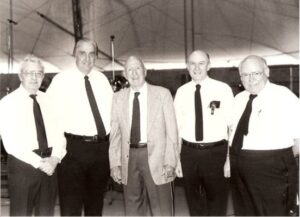 BEFORE HARRY RETIRED, he greatly enjoyed his involvement with the Windjammers Circus Band and his friendship with the famous circus conductor, Merle Evans, and other old percussion pros who also shared his passion for circus music. In the photo below, which I snapped before one of the Windjammers circus performances, he appears with four Windjammers percussionists and the legendary circus director, Merle Evans (in the middle). Boyd Conway and Buster Bailey (far left and far right) had retired from symphony careers, and Doug MacLeod was one of Harry’s dearest friends, one with whom he corresponded for twenty years. Excerpts from their humorous music-related correspondence are included in one chapter of my memoir.

Whatever Happened to the Carson & Barnes Circus?

WHEN I WAS FIRST UPDATING this story in 2019, a web search linked me to an article saying that Carson & Barnes was then billing itself as “The World’s Biggest Big Top Circus.” There, I learned that the Carson & Barnes Circus family had toured North America for four generations, bringing first-class family entertainment to millions.

At that time, they were debuting the 81st tour of “CircusSaurus” and proclaiming that their circus was being presented “in traditional ‘Big Top’ style, with America’s oldest family-owned circus bringing animals and acrobats, clowns and daredevils, and a little old-time Circus Magic to more than 200 American cities each year.” Their positive promotion continued, “With the dawn of a new day comes a new era under the Big Top, and those that were once extinct will re-emerge again as we transform the Big Top into a time machine and embark on an adventure of a lifetime!”

I was happy to learn then that this circus  had a “giant menagerie” of exotic animals from around the world, with a petting zoo that was free of charge before each performance. The circus had gone to great lengths in the past to treat its animals as a family would treat beloved pets, and they proved this with one of the videos on that website.

But that’s all history now, thanks to PETA’s relentless efforts to stop cruelty to circus animals. The elephants were the first animals to be cast out of circuses, and it was downhill for all circuses after that. I’m not on Facebook, but a search for this circus’ name will link you to their Facebook page and several stories on the web about their struggle to preserve the “old circus.” The family is still in the entertainment business, but today their circus bears no resemblance to the big top circus that entertained countless millions for decades. It’s now called “Circus Funtastic.” 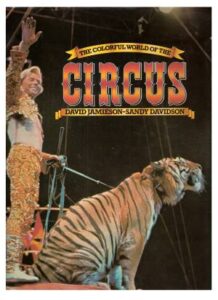 As a lover of Bengal tigers I will never forget the thrill of seeing Gunther Gabel Williams riding an elephant into the ring with a Bengal tiger alongside him. Pictured at left is a book Harry had in his collection of circus books. Gunter is riding atop the elephant in this photo with the tiger he hugged with him. He had a reputation for treating all the animals he trained with both respect and love. For a collection of his photos with the Ringling Bros. circus—including the full picture shown on the book cover—click here. (I well remember the first time I saw Gunther hugging that tiger. So sorry these days are now gone forever, preserved only on film and in photos.)